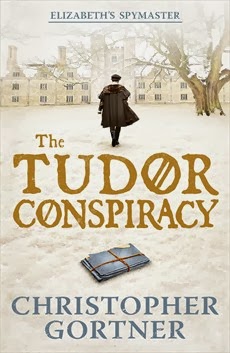 1553: Harsh winter falls across the realm. Mary Tudor has become queen and her enemies are imprisoned in the Tower, but rumours of a plot to depose her swirl around the one person many consider to be England's heir and only hope-- her half-sister, Princess Elizabeth.

Brendan Prescott's foe and mentor, the spymaster Cecil, brings news that sends Brendan back to London on a dangerous mission. Intent upon trying to save Elizabeth, he soon finds himself working as a double-agent for Mary herself.

Plunged into a deadly game of cat-and-mouse with a shadowy opponent who hides a terrifying secret, Brendan races against time to retrieve a cache of the princess's private letters, even as he begins to realize that in this dark world of betrayal and deceit - where power is supreme and sister can turn against sister - nobody can be trusted. (via Hodder.co.uk)

Though The Tudor Conspiracy is the second book in the Elizabeth's Spymaster series, it also works as a standalone novel. So, as I'd not read its predecessor, The Tudor Secret, this served as my introduction to Brendan Prescott and the world he navigates.

From the wonderful descriptions to the three-dimensional characters, The Tudor Conspiracy is an enjoyable read. The atmosphere Gortner creates is very evocative, and I found myself easily transported back to 1553 and its vast unpredictability under the rule of Queen Mary I. It also helped that the novel is set during winter, thus making it a fitting companion during these cold, grey days we're currently experiencing here in England!

I enjoyed the characters; especially Brendan (who serves as narrator for the story) and Peregrine. But though the background of each character is fully explained through the plot, I did feel as if I came in at a bit of a disadvantage not having read The Tudor Secret. Perhaps I would have felt more of an attachment to the characters had I started the series from the very beginning (which I may still go back and do)?

Overall, The Tudor Conspiracy is a suspenseful, fast-paced read with some exciting twists. I'm looking forward to finding out what happens to Brendan in the next novel!