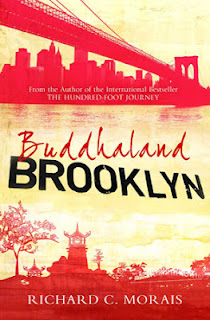 As he approaches his fortieth birthday, the introverted monk Seido Oda is ordered by his superior to leave behind his peaceful refuge in the remote mountains of Japan and set up a temple in Brooklyn’s Little Calabria. There Oda is confronted with an uphill struggle to get to understand the ways of his new host country, and finds his patience and beliefs tested by a motley crew of misguided American Buddhists – a shock which will enable him to come to terms with painful memories of his past and finally experience that sense of belonging he has always sought.

Featuring rich descriptions of idyllic Japanese landscapes and the gritty chaos of New York, and a cast of eccentric, larger-than-life characters, Buddhaland Brooklyn – Richard C. Morais’s second novel after the acclaimed The Hundred Foot Journey – is an entertaining and edifying meditation on faith, cultural divides and the meaning of true acceptance. (via Alma Books)

Having had the pleasure of interviewing Mr. Morais about Buddhaland Brooklyn earlier in the year (click here to read), it’s great to have finally read the novel itself. And, even better, I’m happy to say that I wasn't disappointed!

The novel unfolds at a gentle pace, which I feel reflects the overall theme very well. Usually, as I've mentioned several times in the past, stories that are slow to develop usually make me impatient but here I was happy to just let it blossom in its own time. Much of this had to do with the wonderful, poetic descriptions filling each page – they enticed me to read on further. I even went so far as to bookmark and highlight several pages, so that I might revisit certain images or words of wisdom again!

But ultimately it was the novel's main character, Seido Oda, who persuaded me to keep reading. His backstory and developing insights into the world around him were all fascinating, and I had to find out how he would fare in Brooklyn amongst such challenging personalities. I particularly enjoyed Reverend Oda's interactions with Jennifer and Michael; two very different New Yorkers who perhaps bring out the most in him.

Overall, Buddhaland Brooklyn is a personal story told with wit, insight and simplicity. If you enjoy novels with a compelling sense of place and culture, spirituality, and strong characters, I would definitely recommend this. 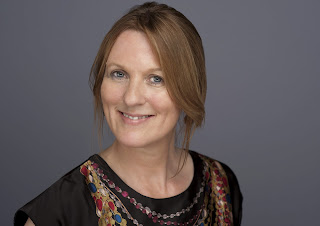 Last month I reviewed Annemarie's engaging historical novel, A Parachute in the Lime Tree, and now it's wonderful to welcome her back to the blog to answer a few questions.

You can find the book's blurb and links her website, social networking accounts, and a place to buy the book at the end of the interview.

~
Q: What influenced your decision to write A Parachute in the Lime Tree from both Irish and German perspectives during World War 2?
A: Ireland during the ‘Emergency’ was a rather colourless, isolated place so Oskar and Elsa, my German characters, would have seemed like exotic birds. Like many people in Ireland, I grew up hearing comic book tales of incompetent German spies during the war and I was intrigued by the idea of Germans who might have been there for other reasons.

Oskar is intent on a quest that really has nothing at all to do with the country in which he finds himself, a place that must have seemed a world away from the lurid blare of war. However, he is much more conspicuous than he thinks and I wondered how he would have fared at a time of such great anxiety and apprehension about a possible German invasion.

As for Elsa, I wanted to explore her experience of exile. In Ireland, she experiences utter disconnection from all she has ever known – and in a place where, having effectively come in through the back door, she has no real sense of security.

The novel tackles some notable historical adversities, including the holocaust. Did you encounter any obstacles whilst researching and, if so, how did you overcome them?
My inability to read German was the biggest obstacle. Ideally, you want to be able to trawl through letters and diaries in order to get a feel for ordinary lives, and I found there was surprisingly little available in English about either the conscript experience or the lives of ordinary Germans on the home front.

Through an online forum, someone in Australia got in touch and offered to put my questions to his elderly neighbour who turned out to have been a member of KG100 based, like Oskar, in Vannes. That was invaluable because I was able to ask him questions about things like the relationship with his comrades, how he spent his free time in Vannes, what it felt like to be in one of those planes.

Someone else put me in touch with the widow of a pilot whose Heinkel had come down over neutral Ireland. She was kind enough to send me her only copy of her late husband’s memoirs (in English!) from her home in Canada – a vivid insight into one young German’s experience of Ireland at the time.

I studied art history and tend to approach things visually, so I find images a very useful source of both inspiration and information. Often it’s the things on the fringes of the main image – the details the photographer or painter took for granted – that are the most fruitful. I spent a lot of time with newspaper images and advertisements because they tell you a lot about people’s preoccupations and priorities.

I really enjoyed the novel's balance, with sections focused on a particular character's perspective or location. Was this something you decided to integrate into the novel before writing, or was it something which just unfolded during the process?
I wrote the first draft in a bit of a splurge, and actually ended up with much more material than I needed. That’s when the hard work of pruning and shaping began. The book concentrates on events in four intertwined lives during a six-week period. However, the relationship of Oskar and Elsa in Berlin some years before (and their subsequent individual experiences) is crucial to understanding what comes later. I needed to find a way of including these aspects without diluting the tension of the main narrative strand. I’m so pleased the eventual structure worked for you.

What advice can you give to other writers interested in tackling historical fiction?
At the moment, I’m immersed in Venice in the 1920s with a handful of characters and the faint outline of a plot. So, right now I’m in evangelical mode when it comes to the value of research as a source of ideas. An object, a photograph, a throwaway remark in a letter – they can all send you off down paths you’d never otherwise have considered. Some of these will be dead ends and you might have to retrace your steps, but it will still lend a quality of authenticity to your writing. This time, incidentally, I can read enough Italian to get by!

Finally, what projects are you working on at the moment? Can we expect to hear more from any of the characters in Parachute?
This summer, I’m going to be spending a week in Annaghmakerrig, an artists’ retreat in Ireland, and I want to have a good chunk of the new novel written by then. I’m also editing Siren, my second novel – restructuring it and firming up aspects of the plot with a view to arriving at a final version before I go away. I love writing short stories and I have lots of bits and pieces that need attention, but I probably won’t get round to those for a while.

I don’t have any plans to revisit the characters in Parachute at the moment, though somebody did ask me at a book club recently ‘What happens after the end? I mean you know, right?’ One character I do wonder about is Emmi, Oskar’s sister, but I’m not sure I want to write her story. 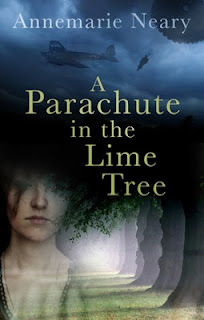 Blurb:
April 1941. German bombers are in the air, about to attack Belfast.
Oskar is a Luftwaffe conscript whose sweetheart, Elsa, was forced to flee Berlin for Ireland two years before. War-weary, he longs for escape.
In remote Dunkerin, Kitty awakes to find a parachute trapped in one of the lime trees. When she discovers Oskar, injured and foraging for food in her kitchen, he becomes a rare and exciting secret. But Ireland during the Emergency is an uneasy place, and word of the parachute soon spreads.
Meanwhile, Elsa is haunted by the plight of the parents she left behind. With the threat of Nazi invasion, she feels far from secure.
A chance encounter with Elsa, and Charlie, a young medical student, finds himself falling in love. Oskar, Kitty, Elsa, Charlie. Their lives intertwine in a climate of war, exile, and ever-uncertain neutrality.

Email ThisBlogThis!Share to TwitterShare to FacebookShare to Pinterest
Labels: A Parachute in the Lime Tree, Annemarie Neary, Interview

Closed for entries | Win a copy of Life of Pi on DVD! [UK Only] 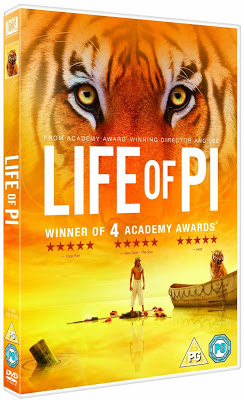 After a small shopping blunder last week, I have two copies of Life of Pi on DVD. So I've decided to put the extra one up for grabs in a giveaway!

Due to financial reasons, and because the DVD will only play on Region 2 players, you can only enter if you're a blog follower who lives in the UK. Sorry, international followers! Stay tuned for an international giveaway later in the year.

To enter, simply follow the instructions on the Rafflecopter widget below. 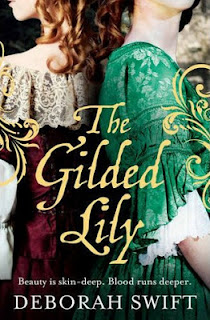 Sadie Appleby has lived all her life in her small village. One night she is rudely awoken by her older and bolder sister, Ella, who has robbed her employer and is on the run. The girls flee their rural home of Westmorland to head for London, hoping to lose themselves in the teeming city. But the dead man's relatives are in hot pursuit, and soon a game of cat and mouse begins.

Ella becomes obsessed with the glitter and glamour of city life and sets her sights on the flamboyant man-about-town, Jay Whitgift. But nothing is what it seems - even Jay Whitgift.

Can Sadie survive a fugitive's life in the big city? But even more pressing, can she survive life with her older sister Ella?

Set in London's atmospheric coffee houses, the rich mansions of Whitehall, and the pawnshops, slums and rookeries hidden from rich men's view, The Gilded Lily is about beauty and desire, about the stories we tell ourselves, and about how sisterhood can be both a burden and a saving grace. (via Goodreads)

The Gilded Lily is an atmospheric historical novel, filled with vivid descriptions and characters who come to life.

Yet, while I enjoyed the beauty of the writing as a whole, there were some elements of the novel which hampered my enjoyment. Firstly, I felt The Gilded Lily developed slowly in places, and I purposefully read through some parts quickly. Secondly was Ella, one of the main characters, who at times I hated so much that I wanted to slap her! Although, this does show that Swift has created a strong, realistic character who can provide intriguing conflict.

Keeping that in mind, there were, in addition, characters whom I loved. These included Ella's caring sister, Sadie, and their acquaintance, Dennis. I adored reading of the developing friendship between Sadie and Dennis; their meetings were certainly one of the reasons why I decided to keep reading.

Overall, The Gilded Lily is skillfully written with striking descriptions and characters capable of summoning a wide range of emotions. If you enjoy a historical novel with a relaxed pace and an unpredictable ending, this could be for you.