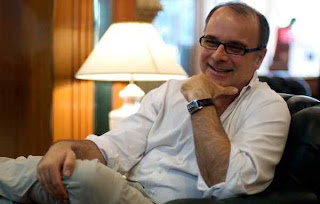 I'm excited to welcome writer Richard C. Morais, who's here to answer some questions about his latest book Buddhaland Brooklyn (its full synopsis can be found at the end of the interview, along with links to his social media accounts and website).

The novel is officially released in mid-April, but you can pre-order a copy now via Alma Books.

Buddhaland Brooklyn is about a Buddhist priest, Seido Oda, who is forced to leave his native Japan and move to New York City. What was the reason for choosing these particular settings?
The germ for my book was The Year of My Life, a slim work by the great 18th century haiku poet-priest, Issa, and the charming film, Amarcord, by Frederico Fellini. I love both of these very different works of art, and was intrigued by the fact that even though they were created in entirely different cultures, epochs and mediums, they had one important commonality: both are autobiographical works where an entire life has been condensed into a single, symbolic year. For some reason I got it into my head I should try and mash these two great works of art together. So, that's how Buddhaland Brooklyn came about. Instead of Italy, however, I chose as my setting an Italian neighborhood in Brooklyn, where my wife and I had lived in the early 1980s. In those days our Brooklyn neighborhood, Carroll Gardens, had much more in common with 1950s Sicily than what the fashionable hot-spot it has become today.

Oda is a member of a fictional Buddhist sect. What prompted your decision to create a fictional sect instead of basing the novel around an existing one?
When a lay writer hubristically assumes the voice of a priest, even in fiction, he invites attack for having distorted a faith and its doctrine – not without cause. From the outset, I did not want my novel to be reduced to an "explanation" of Buddhism, nor did I want to inflate myself as an "expert" on religious matters and, specifically, on a particular Buddhist doctrine. Rather, I wanted to focus on the important but little discussed space I call the "psychology of religion" – that place where one's personal history, ethos and worldview intersects with the formal doctrine of the faith one has embraced. I thought the wisest way to achieve this, without stepping on land mines, was to create my own Buddhist "doctrine". For all its embellishments, however, those who know a thing or two about Buddhism will recognize that the doctrine of the fictional Headwater Sect has a great deal in common with the dogma of Japan's Nichiren faiths. Indeed, I was amused to discover, in chat rooms on Yahoo, that Nichiren Shu priests here in America were recommending the book to their flock as a fine explication of Buddhism.

How long has Buddhism played a role in your own life? Did your research uncover any teachings which you felt important to integrate into your own routine?
I have been a practicing Buddhist since I was 19, but my faith has gone through quite a transformation over the course of my life. For the first 25 years I was a rather dour, austere and "pure" practitioner of my Buddhist faith, but, in the later years, I loosened up considerably. I still pray every day, but I am no longer rigid on matters of doctrine. So the arc of my own faith is in some ways captured by Reverend Oda's journey to Brooklyn.

Did your background in journalism influence the way in which you composed Buddhaland Brooklyn?
My novels are often described by critics as "fablesque," which I think is true, but I also ground my fictional worlds in very specific places and times, which infuses my imaginary worlds with heavy doses of "reality." I like the point and counter-point of that combination. That is, of course, where the skills of the journalist become invaluable. My career as a business journalist has taught me how to conduct vigorous, fact-based research, which materializes in my novels in everything from how to cook an artichoke to the planning permission steps needed to get a temple built in New York.

Are you working on any other projects at the moment?
How nice of you to ask. I am working on my next novel, which I don't want to talk about, other than to say that it revolves around fishing, much like The Hundred-Foot Journey revolved around cooking, and Buddhaland Brooklyn revolved around religion. My work in journalism, meanwhile, can be seen at Barrons.com, America's premier finance magazine.

Lastly, is there a Buddhism-related quote you’d like to leave us with?
With pleasure. As I previously said, one of the main inspirations of my novel is my literary hero, Kobayashi Issa (1763-1827), the poet-priest who plays an important background role in my novel. Here's an amusing haiku by Issa that rather nicely captures the tone of Buddhaland Brooklyn: 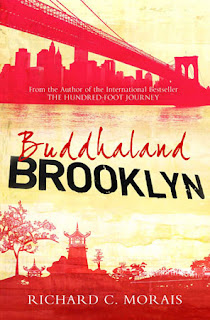 ~
Book synopsis:
As he approaches his fortieth birthday, the introverted monk Seido Oda is ordered by his superior to leave behind his peaceful refuge in the remote mountains of Japan and set up a temple in Brooklyn’s Little Calabria. There Oda is confronted with an uphill struggle to get to understand the ways of his new host country, and finds his patience and beliefs tested by a motley crew of misguided American Buddhists – a shock which will enable him to come to terms with painful memories of his past and finally experience that sense of belonging he has always sought.