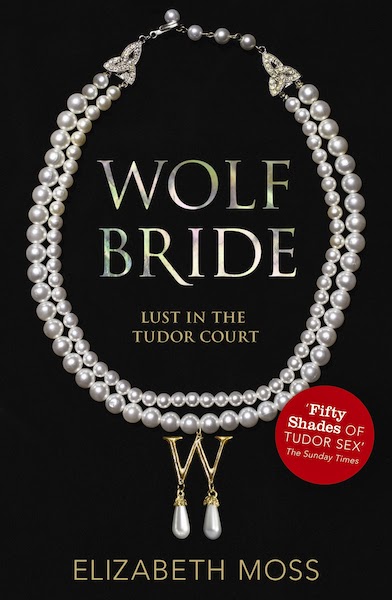 England, 1536
Bound to him against her will...
Lord Wolf, hardened soldier and expert lover, has come to King Henry VIII's court to claim his new bride: a girl who has intrigued him since he first saw her riding across the Yorkshire moors.

Eloise Tyrell, now lady-in-waiting to Queen Anne Boleyn, has other ideas. She has no desire to submit to a man she barely knows and who - though she is loath to admit it - frightens her not a little.

Dare she surrender her body and her heart? (via Goodreads)

Last year I had the pleasure of interviewing Elizabeth Moss about her critically acclaimed novel Wolf Bride, so I was excited to finally read it. For the most part I had a positive reading experience, though there were some aspects which I found more appealing than others.

The plot wastes no time in getting started, with the first scene in the book introducing the wanton Queen Anne Boleyn. I certainly appreciated this introduction, as when I'm reading erotica, I prefer not to wait too long for the action! This also set up the premise of the novel very well as the latter parts of it centre around the Queen's demise.

The novel also illustrates the time period well, whilst also incorporating a bit of a modern twist. I found it interesting to encounter all these historical places and people within a piece of fiction.

Unfortunately, though, I didn't feel a big connection to the characters. While I appreciated Eloise (a headstrong, determined young woman), and Lord Wolf (definitely the most interesting character of them all – he is enigmatic, loyal, and unpredictable), I don't feel that they're characters I'll remember in a few month's time. They just didn't leave all that big of an impression on me.

But despite the few issues I had with Wolf Bride, I'm still looking forward to reading the second book in the series. Overall this was an exciting, albeit imperfect, read.