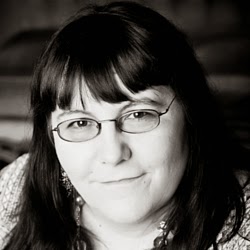 Wolf Bride tells the steamy tale of Queen Anne Boleyn’s lady in waiting, Eloise Tyrell, and the man she is betrothed to, Lord Wolf. What attracted you towards setting such a story during this historical period?
The sheer drama of it. Everything was more life-and-death at the Tudor court than in most later periods of history, with the slightest error in judgement getting you carted off to the Tower of London. This raises the stakes in a romance to an alarming degree. With Henry VIII in the mix, it's not just 'Does the hero get the girl?' but 'Can they survive this and reach a happy ending?' And of course we know, as 21st century readers, that not everything is going to end well for Anne Boleyn at least.

What can you tell us about the two main characters? Are they based on any real historical figures?
Lord Wolf and Eloise Tyrell are not based on any specific historical figures, but they are representative members of the Henrician Court. Lord Wolf is a superb soldier and commander, tough-minded, incredibly loyal to the crown, driven by his loyalty in fact. But as a nobleman, he approaches picking a wife - to breed an heir - with the same lack of emotion as when buying a horse. So you can imagine how a feisty and rebellious young woman like Eloise throws him off balance. Yet he finds her passion invigorating and seems to take pleasure in nettling her whenever they are together. Eloise has been serving the Queen for several years, and is an independent spirit. She wants to marry for love, so being forced into an arranged marriage - Tudor women often had little choice in the matter - makes her desperate. What stuns Eloise about Wolf is how well he seems to understand a woman's body - he's an expert lover, of course! - while failing to understand her heart. But just when things begin to hot up for them, Anne Boleyn is arrested, with Eloise suspected of hiding dangerous secrets about her mistress ...

Judging by the list of previous releases on your blog, you’re quite the productive writer. How do you stay motivated?
I have a large family to support; needing to pay the bills is usually motivation enough to go to my desk every morning. When that doesn't work, I remind myself how little I have achieved so far in comparison with my late mother, who wrote over 150 novels under the name Charlotte Lamb. Now that's productive! 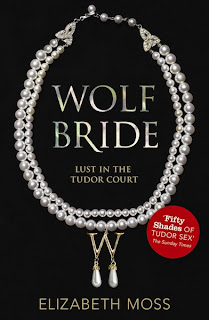 Bound to him against her will...
Lord Wolf, hardened soldier and expert lover, has come to King Henry VIII's court to claim his new bride: a girl who has intrigued him since he first saw her riding across the Yorkshire moors.
Eloise Tyrell, now lady-in-waiting to Queen Anne Boleyn, has other ideas. She has no desire to submit to a man she barely knows and who - though she is loath to admit it - frightens her not a little.

Dare she surrender her body and her heart?