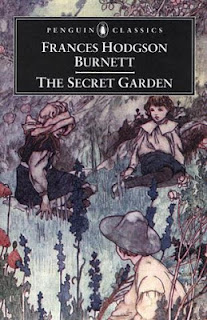 "She was inside the wonderful garden and she could come through the door under the ivy at any time and she felt as if she had found a world of her own."

After the death of her parents in India, sullen and self-absorbed Mary Lennox is sent to live on her uncle's estate on the Yorkshire moors. Exploring the grounds, Mary discovers a walled garden, locked up, abandoned, and in ruins; and in a distant room in the house she finds a cousin she never knew existed-Colin, an invalid, ignored by his father and expecting to die. Mary and Dickon, the housemaid's spirited brother, befriend Colin, and set about restoring the garden, which opens up a world of magic, reconciling the children to the world of life.

Originally published in 1911, The Secret Garden, an extraordinary novel that has influenced writers such as Eliot and Lawrence, highlights the transforming powers of love, joy, and nature, and of mystical faith and positive thinking.) (via Goodreads)

The Secret Garden seems to be a favourite book of many. While I have never previously read it, I saw the film adaptation as a child and fell in love. So it's about time I finally sat down and got to reading!

Although it is without a doubt a charming tale with a great narrative and subtle moral focus, I just couldn't get into it. I don't know if it's because I've seen the onscreen version several times over the last few years and knew what to expect (though that's not been a problem I've experienced with other novels) or if the story didn't move fast enough, but there was something holding the pleasure back. It's very hard to pin-point exactly why I struggled.

There's so much to love about The Secret Garden, like the beautiful focus on kindness and nature, and seeing the character's personalities flourish with the seasons. I'm going to try and read it again at a later date and see if I enjoy it more (perhaps the book isn't to blame? It might have something to do with a reading lull.) But, for now, I might just pop on the DVD.