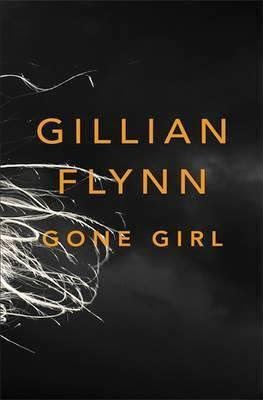 What are you thinking, Amy? The question I've asked most often during our marriage, if not out loud, if not to the person who could answer. I suppose these questions stormcloud over every marriage: What are you thinking? How are you feeling? Who are you? What have we done to each other? What will we do?

Just how well can you ever know the person you love? This is the question that Nick Dunne must ask himself on the morning of his fifth wedding anniversary, when his wife Amy suddenly disappears. The police immediately suspect Nick. Amy's friends reveal that she was afraid of him, that she kept secrets from him. He swears it isn't true. A police examination of his computer shows strange searches. He says they aren't his. And then there are the persistent calls on his mobile phone. So what really did happen to Nick's beautiful wife? And what was in that half-wrapped box left so casually on their marital bed? In this novel, marriage truly is the art of war... (via Goodreads)

Gone Girl has been on my radar ever since I saw Gillian Flynn interviewed on Late Night with Jimmy Fallon last year. But, despite its acclaim, I was left rather disappointed.

It started off well. I read the first page and was immediately sucked in to the action – the fast pace, vivid descriptions and mysterious characters kept the book firmly open in my hands. I couldn't wait to find out what was going on and where all the questions would lead.

Unfortunately, though, things went downhill after the first few chapters. The plot started getting repetitive, with the characters going over the same clues multiple times. It had me wondering how long it would take to actually go anywhere.

But a major, very unexpected plot twist saved Gone Girl halfway through, and that kept me interested for a while. Eventually, however, the twist also became stale and I was once again bored. And then there was the ending which, to me, was a complete anti-climax.

Not to mention the two main characters, Nick and Amy, who are fantastically developed but almost completely unlikeable. I can't say more without giving too much away but, to be honest, the polarising aspects of their personalities are pretty much what make the book. Who would be getting their just-desserts?

I'll still see the film version of Gone Girl which comes out this autumn, though it will be interesting to see how they treat that ending. Altogether, a disappointing and somewhat frustrating, though also intriguing, read.