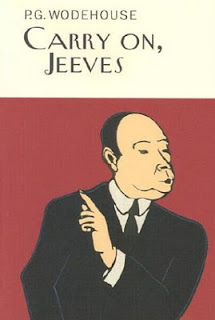 There seems to be little Bertie Wooster can do without the help of Jeeves these days. Formidable aunts, unbidden guests, and other headaches are small potatoes for the ever-resourceful Jeeves. Here is another heavenly dose of humor and intrigue from "the greatest comic writer ever" (Douglas Adams). (via Goodreads)

When I bought this book, I was under the mistaken impression that it was the first in the Jeeves series; only because the description at the back of my copy begins by saying 'These marvellous stories introduce us to Jeeves...'. But, apparently, it's the third book. Slightly bewildered me, but nevertheless it hasn't mattered a great deal as the book is pretty easy to follow.

Carry On, Jeeves is actually a collection of humourous short stories, the majority of which are narrated by Bertram Wooster who is the employer of Mr Jeeves. In each story, he tells the reader about an unfortunate situation himself or his friends have gotten themselves into and how Jeeves craftily attends to them in said situations.

For the most part, I enjoyed these stories. I loved the way they're written – it's very posh 1920's sort of English, and Wooster is always using these funny words and phrases that I guess have become somewhat trademark/stereotypical over the years. I'm talking about this kind of thing:

Now, you may remember that I reviewed Alexander McCall Smith's novel The Dog Who Came In From The Cold, and commented about how I disliked the inauthentic, forced, pretentious way it was written. The thing about that was, though, that it was a novel set in the 21st century, not the 1920's like Carry On, Jeeves. But P.G. Wodehouse, of course, wrote these books in the 1920's and that's part of what makes it work. Plus, the way he writes is so charming and light that you can't help but enjoy it. But now that I look back on McCall Smith's novel, it appears that he was trying to attempt to replicate Wodehouse's attractive narrative, but with little success.

Anyway, you see my point. Though I thought that the plots of the short stories in Carry On, Jeeves had a few too many recurring themes to keep me entirely without boredom (most of them include exasperating wealthy aunts), there were quite a few pages that had me laughing out loud. So, if you want a warm, entertaining and classy read, these Jeeves books will probably be right up your street!