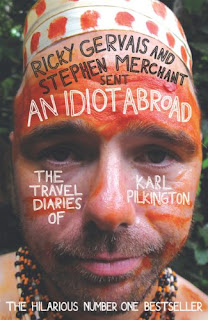 Presenting the Travel Diaries of Karl Pilkington: Adventurer. Philosopher. Idiot. Karl Pilkington isn't keen on travelling. Given the choice, he'll go on holiday to Devon or Wales or, at a push, eat English food on a package holiday in Majorca. Which isn't exactly Michael Palin, is it? So what happened when he was convinced by Ricky Gervais and Stephen Merchant to go on an epic adventure to see the Seven Wonders of the World? Travel broadens the mind, right? You'd think so. Find out in Karl Pilkington's hilarious travel diaries.
'He is a moron. A completely round, empty-headed, part-chimp Manc.' RICKY GERVAIS
'He'd have been happier in medieval times in a village where you didn't travel beyond the local community.' STEPHEN MERCHANT (via amazon.co.uk)

I started watching An Idiot Abroad only about a month ago after catching the repeat of the Taj Mahal episode on Sky. When it first aired, it didn't appeal to me at all – who wants to see an idiotic, narrow minded person go around the world and basically insult everything? Oh, but I couldn't have been more wrong! Yup Karl is an idiot, but he's also completely hilarious and will try almost anything (that isn't bungee jumping of course!) Much to his own chagrin, he gets involved in everything and is honest to everybody. Sometimes I have a hard time believing what he says isn't scripted because it's so offbeat, but apparently it's all just him. I love it!

The book is supposed to be Karl's travel diaries that he wrote as he stumbled across the world under the influence of Ricky and Steve's directions. It does recycle some things he says on the show, but there are quite a lot of new anecdotes in here as well including behind-the-scenes stuff. I don't think I've laughed quite as hard reading a book before! All of his deadpan humour is represented so well. In fact, I've bookmarked some of the pages I found most entertaining. Here's something of Karl's that had me rolling over with laughter:


'I had some toast and a bit of papaya. This was the first time I'd ever eaten papaya. It was okay, but if someone told me I'd never eat papaya ever again, I wouldn't be bothered. I feel like this about most fruit. There is too much fruit in the world, and I don't like buying a lot of it, as it goes off so quickly. Maybe that's why we're told to eat five portions a day, just to get through the stuff before it turns mouldy.'

I very much enjoyed this book. Though, saying that, it wasn't perfect. There were a few bits that upset me – like when he described people eating guinea pigs, frogs, and so forth. Oh, and especially the Chinese 'delicacies'. No offense intended to anyone reading this, but coming from the UK and being a big animal lover, I just don't agree with how animals are treated/slaughtered/eaten in these countries. But, apart from that, this book was a complete riot. If you watch An Idiot Abroad, you'll want to read this gem!