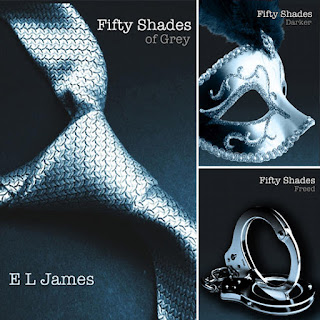 When literature student Anastasia Steele is drafted to interview the successful young entrepreneur Christian Grey for her campus magazine, she finds him attractive, enigmatic and intimidating. Convinced their meeting went badly, she tries to put Grey out of her mind - until he happens to turn up at the out-of-town hardware store where she works part-time. The unworldly, innocent Ana is shocked to realize she wants this man, and when he warns her to keep her distance it only makes her more desperate to get close to him. Unable to resist Ana’s quiet beauty, wit, and independent spirit, Grey admits he wants her - but on his own terms. Shocked yet thrilled by Grey's singular erotic tastes, Ana hesitates. For all the trappings of success – his multinational businesses, his vast wealth, his loving adoptive family – Grey is a man tormented by demons and consumed by the need to control. When the couple embarks on a passionate, physical and daring affair, Ana learns more about her own dark desires, as well as the Christian Grey hidden away from public scrutiny. Can their relationship transcend physical passion? Will Ana find it in herself to submit to the self-indulgent Master? And if she does, will she still love what she finds? Erotic, amusing, and deeply moving, the Fifty Shades Trilogy is a tale that will obsess you, possess you, and stay with you forever. (via Goodreads)

I originally planned to review each book in its own blog post, but little did I know just how infactuated I would become with the Fifty Shades world! I managed to finish the entire trilogy in about four or five days – I've never read any series that fast before! So, you can gather that I very much enjoyed myself.

But, oh dear Lord, I had no idea what I was letting myself in for! In retrospect, it was a stupid idea of mine to have started reading the first book, Fifty Shades of Grey, less than a week before my exam. I became so entangled with the love affair between Anastasia Steele and Christian Grey that I could hardly get any work done! Both the characters and their passionate story are truly addictive, especially Mr. Christian Grey who must be one of the most deliciously complicated and ludicrously sexy leading men out there. Edward Cullen has absolutely nothing on him!

Speaking of Cullen, this brings us to the origin of this book. James originally began writing Fifty Shades as a work of Twilight fanfiction, so particularly at the beginning of the first book you might notice some rather Twilight-vamp-esque qualities to Christian: Ana, who narrates all three of the books, notes his intense eyes, striking appearance, magnetic grace and the tendency to hypnotise women with his looks.

Ana also seems a bit like Bella Swan at first: she's quiet and studious, innocent, unassuming and subtly beautiful, but unlike Bella she's much more assertive and driven by her own ambition. In fact, Ana very much inspires me.

The books evolve into their own, with Ana proving herself to be a source of strength for her man. The very human Christian, while gorgeously sensual, is a highly complex character and struggles to battle the many demons housed within his soul.

There's just so much more to this book than erotica. Behind it is a beautiful love story with plenty of endearment and suspense woven between. I don't think I have ever read a book that's made me smile so much, or provoked so much emotion in me (book three nearly had me in floods of tears!)

Honestly, I can't gush enough about these; they're just so intense and surprisingly classy. If you can handle the naughty bits (ahem), then don't miss out on Fifty Shades! They are very high on my favourites list now.

--
Like what you've heard? Visit The Book Depository to get your copy.