Review: The Garden of Evening Mists by Tan Twan Eng 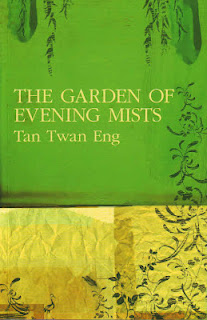 It's Malaya, 1949. After studying law at Cambridge and time spent helping to prosecute Japanese war criminals, Yun Ling Teoh, herself the scarred lone survivor of a brutal Japanese wartime camp, seeks solace among the jungle-fringed plantations of Northern Malaya where she grew up as a child. There she discovers Yugiri, the only Japanese garden in Malaya, and its owner and creator, the enigmatic Aritomo, exiled former gardener of the Emperor of Japan. Despite her hatred of the Japanese, Yun Ling seeks to engage Aritomo to create a garden in Kuala Lumpur, in memory of her sister who died in the camp. Aritomo refuses, but agrees to accept Yun Ling as his apprentice 'until the monsoon comes'. Then she can design a garden for herself. As the months pass, Yun Ling finds herself intimately drawn to her sensei and his art while, outside the garden, the threat of murder and kidnapping from the guerrillas of the jungle hinterland increases with each passing day. But the Garden of Evening Mists is also a place of mystery. Who is Aritomo and how did he come to leave Japan? Why is it that Yun Ling's friend and host Magnus Praetorius, seems to almost immune from the depredations of the Communists? What is the legend of 'Yamashita's Gold' and does it have any basis in fact? And is the real story of how Yun Ling managed to survive the war perhaps the darkest secret of all? I really wanted to like this book, and thought that I would. (via Goodreads)

I love Japanese gardens, and have always been fascinated by World War II. However, I know nothing about Malaya or the conflicts that arose there in the years following so I was excited about getting to reading this book.

But, unfortunately, I didn't enjoy it at all. While it is very well written, and the places are beautiful and intriguing, there wasn't much beyond that which grasped my attention. I felt disconnected from the characters; most of all the main character who I found to be distant and, at times, cold. I'm also not a very patient person (as some of you already know from my previous reviews) and this is quite a slow moving novel.

So, again, if you have more patience than me to wait for a book to evolve, then give this a try.

I must say that I'm a bit dissapointed with my reading track-record lately! Hopefully I'll enjoy my next novel more.