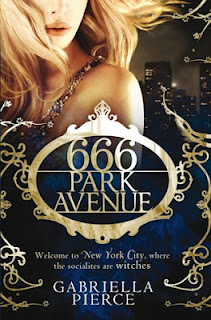 What if your mother-in-law turned out to be an evil, cold-blooded witch . . . literally?

Ever since fabulously wealthy Malcolm Doran walked into her life and swept her off her feet, fledgling architect Jane Boyle has been living a fairy tale. When he proposes with a stunning diamond to seal the deal, Jane can't believe her incredible luck and decides to leave her Paris-based job to make a new start with Malcolm in New York.

But when Malcolm introduces Jane to the esteemed Doran clan, one of Manhattan's most feared and revered families, Jane's fairy tale takes a darker turn. Soon everything she thought she knew about the world—and herself—is upended. Now Jane must struggle with newfound magical abilities and the threat of those who will stop at nothing to get them. (via Goodreads)

I wanted to read 666 Park Avenue because I'd heard that a TV series based on the book was being made, and Terry O’Quinn from Lost had been cast as one of the characters. Plus, these days, I’m all for reading the book before seeing the on-screen adaptation. But that’s just not going to be possible with this one for the moment. I'm not even halfway through!

It's the composition that lets 666 down the most. The actual storyline is pretty good, which is probably why it got picked up to be a television series, but the way it's told is very much lacking. I get the sense that the Pierce was aiming for some witty, semi fairy-tale feel, but she has disappointingly missed the mark.

At 40% through the book, I should care enough for the characters to move on, but I don’t. It’s taking too long and the writing style is just frustrating. I might try to read more of 666 Park Avenue when I’m in a more patient mood, but I’m sick of waiting for the story to pick up pace and evolve. Perhaps the TV series will encourage me to have another go?

Rating: None, as reading wasn’t completed.
Written by Sophie at 14:25