Review: Harry Potter and the Goblet of Fire by J.K. Rowling 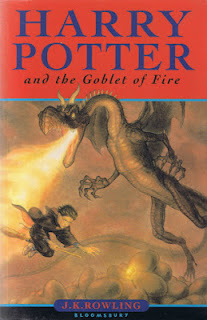 It's the summer holidays and soon Harry Potter will be starting his fourth year at Hogwarts School of Witchcraft and Wizardry. Harry is counting the days: there are new spells to be learnt, more Quidditch to be played, and Hogwarts castle to continue exploring. But Harry needs to be careful - there are unexpected dangers lurking ...

J.K. Rowling continues to surprise and delight with the power of her rich, demanding and action-packed storytelling.(via Goodreads)

I'm sorry to say that I struggled with The Goblet of Fire. This will seem very trite, as I've said it no less than fifty times by now, but I think my pre-knowledge of the story has very much affected my enjoyment of the Harry Potter world. I don't know if having watched the films many times is the only reason for this, or if it's also because I'm not 'clicking' with Rowling's narrative, but whatever the reason I wish I could undo it!

Nevertheless, even though my read didn't go completely well, there were still aspects of it that I enjoyed, such as the introduction of many new and interesting characters, and the never-ending wisdom of Dumbledore (I've bookmarked a couple of pages so I can revisit his quotes!)

But I'm not giving up on the Harry Potter series, and I'm still planning on reading the remaining books. Perhaps, though, I'll take my time, read them alongside other books, and leave my ratings on Goodreads instead of reviewing each one on my blog.