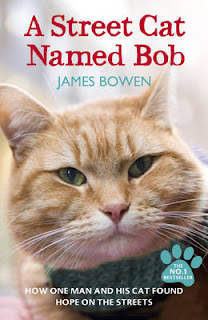 When James Bowen found an injured, ginger street cat curled up in the hallway of his sheltered accommodation, he had no idea just how much his life was about to change. James was living hand to mouth on the streets of London and the last thing he needed was a pet.

Yet James couldn't resist helping the strikingly intelligent tom cat, whom he quickly christened Bob. He slowly nursed Bob back to health and then sent the cat on his way, imagining he would never see him again. But Bob had other ideas.

Soon the two were inseparable and their diverse, comic and occasionally dangerous adventures would transform both their lives, slowly healing the scars of each other's troubled pasts.

A Street Cat Named Bob is a moving and uplifting story that will touch the heart of anyone who reads it. (via Goodreads)

A Street Cat Named Bob tells the true story of how the lives of an unlikely duo – a former addict turned street musician and a streetwise ginger tomcat – became enriched after a chance encounter. Through Bob's presence, James is given a sense of responsibility which propels them both towards a future more loving, structured, and hopeful than ever.

I came to really love Bob and his very unique personality. I don't think I've heard of a cat with such natural patience and intuition, and you can clearly feel the bond between him and James. I also really appreciated reading an insider's perspective on the lives of people who live and work on the streets. My views on buskers, Big Issue sellers, and other street dwellers have certainly changed, and I'm going to make sure to show them more courtesy next time I'm out and about.

But that's not to say that A Street Cat Named Bob was perfect. The writing isn't particularly well-crafted, and I did note a cliché or two. However, to pay too much attention to this would be to miss the heart and honesty of the story and storyteller. And this is certainly a very honest book with a lot of heart.

Overall, A Street Cat Named Bob is an eye-opening tale about a man who found new hope through the unwavering love of a feline companion. If you're an animal lover who's looking for an easy summer read, I highly recommend this.