Review: The Transfer (a Divergent short story) by Veronica Roth 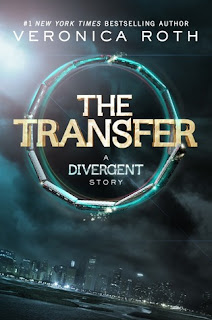 Warning: Don't read this short story (or this review) if you haven't read the first two books in the Divergent series beforehand!


More Four! Fans of the Divergent series by #1 New York Times bestselling author Veronica Roth will be thrilled by "The Transfer," the first of four new short stories told from Four’s perspective. Each brief story explores the world of the Divergent series through the eyes of the mysterious but charismatic Tobias Eaton, revealing previously unknown facets of his personality, backstory, and relationships. (via Goodreads)

Being a Divergent fan is great, isn't it? We get the last book in the trilogy next month, a high-profile film next year, and a whole set of short stories told from Four's point-of-view!

The Transfer is the first short story to be released (if you don't count Free Four, which was available for free on the internet a few months ago before it was subsequently pulled. It'll be re-released as an eBook in the UK on 26th September). It illustrates Tobias's life prior to becoming a Dauntless initiate; before he became the boy that Tris knows and loves. Indeed, he's certainly a very different person – here he is a scared, timid boy who is at the complete mercy of his tyrannical father, Marcus.

Altogether, The Transfer is a fantastic short story which will both shock and delight its readers. I can't wait for The Initiate!