Currently Reading: The Catcher In The Rye by J.D. Salinger 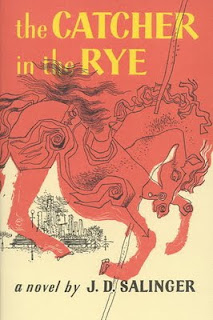 "The Catcher in the Rye" is the ultimate novel for disaffected youth, but it's relevant to all ages. The story is told by Holden Caulfield, a seventeen- year-old dropout who has just been kicked out of his fourth school. Throughout, Holden dissects the 'phony' aspects of society, and the 'phonies' themselves: the headmaster whose affability depends on the wealth of the parents, his roommate who scores with girls using sickly-sweet affection. (via The Book Depository)
I originally picked Of Mice and Men by John Steinbeck to read next. Then I found The Catcher In The Rye staring me in the face, so I opened it up and read the first page. The airy cynisism of the first few sentences have reeled me in! So sorry John, you'll have to wait a bit longer!

Now please excuse me while I dive head first into this classic!
Written by Sophie at 00:34

Email ThisBlogThis!Share to TwitterShare to FacebookShare to Pinterest
Labels: Currently reading, J.D. Salinger, The Catcher In The Rye

I'd have to honestly say that I'm quite intimidated by this book. :-P

Hehe, I think it's hilarious so far. Couldn't put it down last night! :-))

I really liked this one. I was afraid I was going to hate it and tear it apart but it was a surprisingly good read.