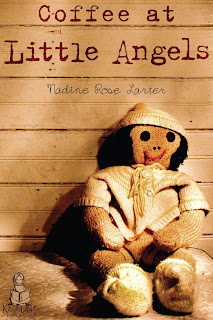 Phillip, Sarah, Kaitlyn, Caleb, Maxine, Grant, Melanie and Josh grew up in a small town where they spent their high school years together as an inseparable clique. But high school has ended, and they are all living their own “grown up” lives, each under the impression that their group has basically come to an end. When Phillip dies in a hit and run accident, Kaitlyn summons the others to all come back home, forcing a reunion that no one is particularly interested in partaking in.

Coffee at Little Angels follows how each character deals with the death of a childhood friend while at the same time dealing with their own ignored demons after years of separation. Events unfold as the group tries to rekindle the friendship they once shared to honour the memory of a friend they will never see again. (via The Katalina Playroom)

This is the kind of story that anybody could relate to in one way or another. Each chapter is dedicated to the thoughts of one character, as they guide you through their perspective of the unfolding events. The alternation between these is clearly indicated, and they each have their own manner and voice, so you never get lost trying to figure out whose side of the story you're getting.

Though I felt that I couldn't fully relate to Coffee At Little Angels, having been fortunate enough to have not lost anyone that's ever been close to me yet (with the exception of some non-human family members), I could understand the tensions between these estranged friends. It's hard for them to see each other after so many years, especially as some parted under less than amiable terms. I can imagine that when you're back face-to-face under especially stressful circumstances, it would be near impossible not to resurface old feelings and unresolved issues. This is something that concerns me about my own future, when there's someone I must see again out of respect for another.

Overall, I felt that this was a good story with good intentions. There were parts of it that I thought could use some work and some characters who could've shared their perspectives more (Melanie in particular), but a valiant first novel from Nadine.


If you would like to find out more about Nadine and Coffee At Little Angels, check out her guest post here.