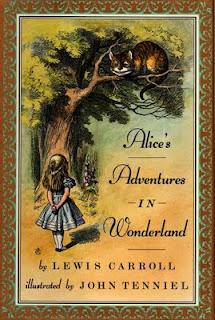 Bored on a hot afternoon, Alice follows a White Rabbit down a rabbit-hole – without giving a thought about how she might get out. And so she tumbles into Wonderland: where animals answer back, a baby turns into a pig, time stands still at a disorderly tea party, croquet is played with hedgehogs and flamingos, and the Mock Turtle and Gryphon dance the Lobster Quadrille. In a land in which nothing is as it seems and cakes, potions and mushrooms can make her shrink to ten inches or grow to the size of a house, will Alice be able to find her way home again? (via amazon.co.uk)

Everyone is familiar with Alice's Adventures In Wonderland, whether they've encountered it by watching, listening or by reading. I admit this is actually the first time I've read the book itself, but I've seen the Disney cartoon and most recently the Tim Burton adaptation (which of course is very different as it features an older Alice). So going in, I had a good idea of what to expect.

There really isn't much for me to say about this book that hasn't already been said. It's such a well-loved story, and it's so easy to see why. The characters are unbelievably silly, the plotline is crazy, and the dialogue is sharp and witty to no end. Precisely my type of book! My favourite exchanges, arguably, are those between Alice, the Gryphon, and the Mock Turtle. This had me laughing for ages:

I single that part out, but really there were so many moments that had me tickled. There can't be many book lovers who are yet to pick up Alice's Adventures, but if you haven't, do. It's so charming and offbeat that it will keep you light and happy on even the dreariest of days!
Written by Sophie at 20:13