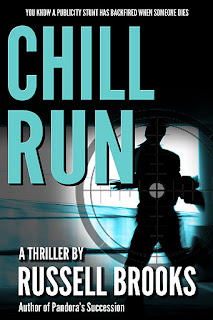 You know a publicity stunt has backfired when someone dies.
Starving author Eddie Barrow, Jr., will do anything to get a book deal with a NYC publisher. Even if it means getting caught by the media while engaging in S&M with a female celebrity as a publicity stunt. What Eddie gets instead are details of a billion dollar fraud scheme from a suicidal client who's fatally shot minutes later. Now on the run from the law and the killers, Eddie seeks help from two unlikely friends—an alcoholic and a dominatrix.
With few resources, Eddie races to clear his name, unveil the fraud scheme, and expose the killers before he becomes their next victim. (via Goodreads)

I wasn't sure what I should expect from Chill Run but I ended up really enjoying it! Eddie is the central character in this fast-paced story – he's an aspiring author who at the beginning of the story has just lost his job, his girlfriend & family ties. But things get even worse for him when he witnesses a murder & is subsequently accused of being the perpetrator. This leads to himself and his best friends to flee, and search for a way to clear Eddie's name.

So, as you can expect, Chill Run is loaded with some very unpredictable twists and turns that'll keep readers on their toes. I must admit that I wasn't sure if I liked the characters all that much at the beginning (mostly because of the publicity stunt they tried to pull), but by the end they grew on me & I began to care for them.

If you enjoy some unpredictable mystery with some well-developed characters & plot ,then pick up Chill Run. It won't disappoint!