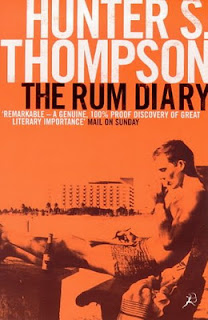 Begun in 1959 by a then-twenty-two-year-old Hunter S. Thompson, The Rum Diary is a brilliantly tangled love story of jealousy, treachery and violent alcoholic lust in the Caribbean boomtown that was San Juan, Puerto Rico, in the late 1950s. Exuberant and mad, youthful and energetic, The Rum Diary is an outrageous, drunken romp in the spirit of Thompson's bestselling Fear and Loathing in Las Vegas and Hell's Angels. (via Goodreads)

Don't let the title or description fool you because there is so much more depth to The Rum Diary than drinking and debauchery. I didn't find anything about it boring – every situation is as unpredictable as the one before it, and all the characters are offbeat and outrageous in one way or another. The book is set in late '50s Puerto Rico, when American writer Paul Kemp arrives on the island and takes a job at an English language newspaper full of unruly drunken journalists, the majority of which live with the threat of being fired on a daily basis. Paul himself is a cynical heavy drinker who is actually pretty intelligent, but his nomadic and self-destructive nature means that he hasn't achieved as much in life as he feels he deserves.

What I love most about The Rum Diary is that it's so beautifully written. Thompson has this ability to paint amazing pictures with words, and now I understand why he is such a celebrated writer. The way he illustrates the exotic air of Puerto Rico and lets us see into the workings of Paul's deepest thoughts is nearly on the verge of being poetic. Here's an extract I want to share with you; Paul is talking us through a typical day during his early months on the island:


'Those were the good mornings, when the sun was hot and the air was quick and promising, when the Real Business seemed right on the verge of happening and I felt that if I went just a little faster I might overtake that bright and fleeting thing that was always just ahead.
Then came noon, and morning withered like a lost dream. The sweat was torture and the rest of the day was littered with the dead remains of all those things that might have happened, but couldn't stand the heat. When the sun got hot enough it burned away all the illusions and I saw the place as it was – cheap, sullen, and garish – nothing good was going to happen here.
Sometimes at dusk, when you were trying to relax and not think about the general stagnation, the Garbage God would gather a handful of those choked-off morning hopes and dangle them somewhere just out of reach; they would hang in the breeze and make a sound like delicate glass bells, reminding you of something you never quite got hold of, and never would. It was a maddening image, and the only way to whip it was to hang on until dusk and banish the ghosts with rum. Often it was easier not to wait, so the drinking would begin at noon. It didn't help much, as I recall, except that sometimes it made the day go a little faster.'

Can you see what I mean? So, if you want to enjoy some excessive situations while reading beautifully written prose then The Rum Diary is for you. Definitely one of the best books I have ever read.