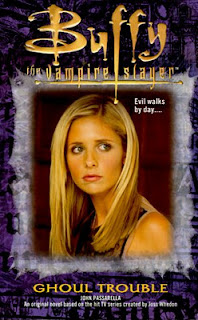 Something wicked has been preying on Sunndale students—and whatever it is, its methods are pretty gruesome. Buffy locates some human bones that have been picked clean, and knows that she's dealing with an unearthly evil. Some help from the Scooby Gang would be ideal, but they've run into trouble of their own. Oz and Xander are literally (perhaps unnaturally) mesmerized by a hottie new chick band headlining at the Bronze, and Willow has been captured by Sunnydale's latest resident carnivores.

What they need is the Slayer. But in order to help her friends, Buffy must first dust a vampire—one that has an urgent interest in Joyce Summers, the unique ability to resist sunlight, and an open invitation to the Summers' house... (via Goodreads)

I enjoyed Ghoul Trouble – much more than I enjoyed the Season 8 comic book series – it's fair to say that I'm definitely more of a full-length novel girl when it comes to these tie-ins. It's written pretty well in that you can imagine all the characters speaking and acting in the same way as they would and did on the television show. There's a lot in the story to keep you interested too, as there are two separate sets of villains that Buffy has to deal with – a rock band consisting of all girls who have a supernatural ability to hypnotise men, and a vampire who can walk in daylight and enter private houses without requiring an invitation.

But while Ghoul Trouble is jam packed with plenty of Buffy-accurate fiends and festivities, I have one quite major problem with it: Faith. She is mentioned absolutely nowhere. Before the story even starts, there is a page that tells the reader that the novel ties in with season three of the television show. Season three is my absolute favourite season, so I know it pretty well. And judging by all of the events from the show that have been mentioned in the book to help the reader to establish the story's place in the Buffyverse, she should've definitely been there. It's not far enough along the season 3 time frame for Faith to have gone evil yet, as Giles is still Buffy's watcher. And it couldn't have been before she arrived in Sunnydale, because Angel has already returned from hell. So there's really no excuse for her not to be there.

So based on that, I'm going to take one full point off of the final rating. It's a shame, because any mention of Faith would've made Ghoul Trouble so much better. If the author didn't like her, then why not just get one of the characters to say that she was out of town or something? It makes no sense.