Review: Harry Potter and the Prisoner of Azkaban by J.K. Rowling 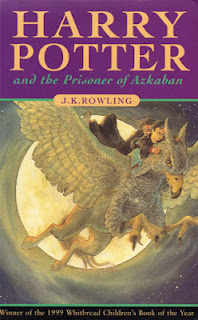 Harry Potter, along with his best friends, Ron and Hermione, is about to start his third year at Hogwarts School of Witchcraft and Wizardry. Harry can't wait to get back to school after the summer holidays. (Who wouldn't if they lived with the horrible Dursleys?) But when Harry gets to Hogwarts, the atmosphere is tense. There's an escaped mass murderer on the loose, and the sinister prison guards of Azkaban have been called in to guard the school...(via Goodreads)

As I read further into the Potter series, I increasingly realise why these books are so popular with all generations. It's not just the underworld of magic, but also the intricacy of the prose. I love how Rowling plants clues and Easter eggs along the way, gently linking a small event in a previous book to a larger one in the present, building plotlines gently. As a reader, it makes me feel very rewarded.

The Prisoner of Azkaban also surprised me more than the previous two in the series. Again, it's impossible for me not to continously think about the films, having seen them first. But compared to The Philosopher's Stone and Chamber of Secrets, the on-screen version of Azkaban changes much more. I understand why they had to do this: there are many parts of the book which involve characters waiting for events to occur for prolonged periods of time. And unlike in a written story, a film can't constantly illustrate this kind of time lapse in a way that wouldn't seem mundane. So scenes, especially those nearer the end, had to be cut and altered for cinematic purposes.

Anyway, that's another exciting Harry Potter book I can now be happy about having read! Now on to the next four.