Review: Harry Potter and the Chamber of Secrets by J.K. Rowling 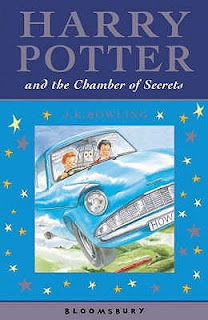 But then horrible things start happening. Harry hears evil voices. Sinister messages appear on the wall. But nothing can prepare the three friends for what happens next ...

A brilliant sequel to the award-winning Harry Potter and the Philosopher's Stone. (via Goodreads)

I thought I'd have a little break in between reading the first and second books in the Harry Potter series, but I couldn't stay away!

The Chamber of Secrets is just as good as The Philosopher's Stone, but with a deeper sense of suspense. This is also Harry's second year at Hogwarts, so the reader gets to explore more of the castle and its inhabitants along with him, as well as many further aspects of the wizarding world.

New characters are introduced, and one of the most impressionable on me was Gilderoy Lockhart; a famous and very self-absorbed wizard who fancies himself a little too much! He is precisely the opposite of Harry, who is modest and prefers not to boast about his accomplishments. I think this is one of the most distinguishable characteristics of Rowling's writing – her ability to create well-developed, vivid characters. It's hard to get one mixed up with another.

However, like I said in my review of The Philosopher's Stone, it's a shame that I can't erase what I remember watching in the films! It certainly takes away some of the excitement.

Even so, I can't wait to read the rest of the books. I'm starting on The Prisoner of Azkaban now, and will read the entire Harry Potter series before I start with anything else (or at least try and read them alongside other books!)