Review: All I Want is You by Elizabeth Anthony 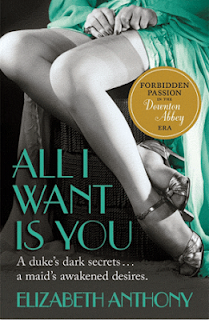 Set in a country house in the 1920s, this tale of forbidden love between a kitchen maid and her aristocratic master is perfect for fans of Downton Abbey and E.L. James' Fifty Shades of Grey.

1920. Seventeen-year-old Sophie is a scullery maid at a large country house, Belfield Hall, but what she truly desires is to dance on stage in London.

Glamorous Lady Beatrice offers her assistance, though not without an ulterior motive. A new heir - the seductively handsome Lord Ashley - is about to arrive at the Hall: a man that Beatrice will do anything to ensnare... even if she has to exploit her young maid.

What she doesn't know is that Sophie has met Ash once before. And as Lady Beatrice's devious plan unravels, Sophie has two choices: refuse to be a mere plaything for the man she loves so desperately, or give in to the thrill of unimaginable sexual pleasure... (via Hodder.co.uk)

I'm a massive fan of Downton Abbey, and of course I loved Fifty Shades of Grey, so I have to admit that I was pretty intrigued when All I Want is You popped through my letterbox. But, then again, I was also weary – historical romance novels which tend to take 'modern liberties' have a track record of getting on my nerves (see my review of Julia Quinn's The Duke and I). How would I end up feeling about this one?

Well, All I Want is You starts like a normal historical novel. In the beginning, Sophie describes her life as a young girl and the lead-up to becoming a maid at a big house. It seems to show more of an accurate portrayal of a servant's life than even Downton Abbey (it's fair to say that the staff at Downton are perhaps a little too spoilt to be believed!). However, these accuracies fade as soon as the expected sexual side of the plot begins to develop.

At first, I found it really hard to accept that all these people could be that forward and blasé about sexuality. Surely they would have been a little more careful about discussing sex it in those days, and would have chosen their partners with greater care? This certainly wasn't so in Sophie's version of 1920s England.

And that's the point. All I Want is You isn't supposed to be an accurate historical representation of love, sex and hierarchies in the 1920s – it's supposed to be enjoyed for what it is, and that is a powerful story of forbidden romance. So when I finally managed to wrap my brain around this realisation, I really started to enjoy the novel.

In the end, I managed to finish All I Want is You in about three days, all because I could barely put it down! I became addicted to Sophie and Lord Ashley's love story, and I couldn't wait to find out how they would resolve the many complications getting in the way of their relationship. One of these complications is the seductive and relentless Lady Beatrice, who will do anything to exploit those who get in the way of her plans.

There are plenty of sex scenes in the book and they can be quite graphic, though they are tastefully written. But, be warned, many are not for the squeamish!

In summary, All I Want is You is a wonderful, addictive tale of romance in an alternative 1920s England. If you enjoy an intense love story and don't mind some modern touches blended within a historical period, I'd highly recommend it. My only complaint now is having to wait for book two to find out what happens next!