Review: The Duke and I by Julia Quinn 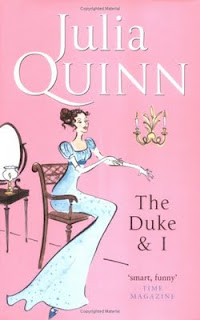 After enduring two seasons in London, Daphne Bridgerton is no longer naive enough to believe she will be able to marry for love. But is it really too much to hope for a husband for whom she at least has some affection?

Her brother's old school friend Simon Bassett - the new Duke of Hastings - has no intention of ever marrying. However, newly returned to England, he finds himself the target of the many marriage-minded society mothers who remain convinced that reformed rakes make the best husbands.

To deflect their attention, the handsome hell-raiser proposes to Daphne that they pretend an attachment. In return, his interest in Daphne will ensure she becomes the belle of London society with suitors beating a path to her door...

There's just one problem, Daphne is now in danger of falling for a man who has no intention of making their charade a reality... (via Goodreads)

I've been eyeing Julia Quinn's books at the bookshop for quite a while now, though unable to bring myself to pay for a copy for one reason or another. So when my mum returned from the local library with three of her novels in tow, imagine my excitement! But did she live up to my expectations? Sadly, no.

This will sound a bit prejudice of me, but I was disappointed when I found out that Julia is an American writing about late 18th/early 19th century Britain. No offence to the Americans out there, but being English, this did raise alarm bells for me. However, once I saw that she graduated from Harvard I thought... well, she must have found a way to do this pretty well. Maybe she read a load of Jane Austen novels beforehand, and visited our country to get a proper gist of what 'classical' life here was really like.

But I got none of this from The Duke and I. To me, it's just a book that could rival Mills and Boon. Nothing about it appears overly intelligent or even remotely historically accurate. The historical accuracy probably wouldn't have bothered me about two years ago when I ranked Becoming Jane near the top of my 'favourite films' list, but now I'm a real stickler for detail. Anything that's far-fetched, I don't like. What's more is that the author has tried to make the prose sound regal, dignified and witty, but I just found it all boring, clichéd and repetitive.

I know I'm probably missing the point, but apparently this isn't my type of book. I'll be sure to avoid romance novels set in historical times from now on. Such a shame because I really wanted to like Julia Quinn...