Review: That Day In September by Artie Van Why 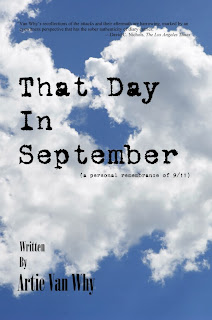 We all have our stories to tell of where we were the morning of September 11, 2001. This is one of them. In "That Day In September" Artie Van Why gives an eyewitness account of that fateful morning. From the moment he heard "a loud boom" in his office across from the World Trade Center, to stepping out onto the street, Artie vividly transports the reader back to the day that changed our lives and our country forever. "That Day In September" takes you beyond the events of that morning. By sharing his thoughts, fears, and hopes, Artie expresses what it was like to be in New York City in the weeks and months following. The reader comes away from "That Day In September" with not only a more intimate understanding of the events of that day, but also with a personal glimpse of how one person's life was dramatically changed forever. (via Goodreads)

When first asked to review That Day In September by the author, I wasn't sure what to expect from it. Of course, I knew all about 9/11, and I knew that Artie had been in New York City on the day, but until reading the book I had little idea as to what degree he had experienced it.

As it turns out, his offices were right across the street from the World Trade Center. He was there, literally in front of the buildings, out on the streets after the first blast, watching it all happen right in front of him. And until reading about the events in this short memoir, I had no idea how dangerous it was down on the street for the people below even before the towers came crumbling down.

However, That Day In September goes further than describing those terrifying events. We learn a bit about Artie and his life before arriving in New York, what brought him to the city, and how he enjoyed the World Trade Center before 9/11. And what's most important, he writes from his heart, making the book full of emotion. I loved the way he talks of the the aftermath – describing shock, incredible courage and unity, a city in mourning, and the collective respect and love.

Overall, That Day In September is an insightful, evocative, well-rounded and beautifully written memoir. If you want to read a first-hand account of the September 11th attacks, then I highly recommend this one.


To purchase a copy of That Day In September, visit amazon.com or amazon.co.uk.
Written by Sophie at 16:32