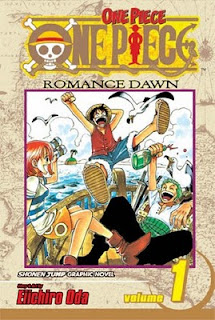 A new shonen sensation in Japan, this series features Monkey D. Luffy, whose main ambition is to become a pirate. Eating the Gum-Gum Fruit gives him strange powers but also invokes the fruit's curse: anybody who consumes it can never learn to swim. Nevertheless, Monkey and his crewmate Roronoa Zoro, master of the three-sword fighting style, sail the Seven Seas of swashbuckling adventure in search of the elusive treasure "One Piece." (via Goodreads)

This is only the second manga I've read but I can already say that I am in love with the stuff now! I'm kicking myself for not reading any of it sooner! What were you thinking, self?! It's going to become an expensive extension to my book buying habits, that's for sure! Haha.

As for One Piece volume 1, well, I completely adored the story! I bought it in Waterstones after reading the first few pages, and decided that with the combination of pirates and good ol' Japanese manga humour, it would be perfect for me. But I never expected it to be this fun! The main character is called Luffy and he is this crazy, care-free, adventurous type who meets a pirate called Shanks when he is a boy, and decides from then on that he wants to become 'the king of the pirates'. Ten years later, he finally leaves his village and sets out to find himself a crew; meeting some completely loony characters in some delightfully dangerous situations along the way.

I seriously can't emphasise enough how fun One Piece volume 1 is! The storyline is off-beat and interesting, plus all the characters are as mad-as-hatters. If you love some out-there humour, then this is definitely for you. My personality can be a little (ahem) crazy, so this fit me like a glove! Plus, I loved that at the end of each chapter, there is a fun and charming extra such as how to draw your own Jolly Roger, pirate trivia, and so on. There's also a profile on the author, plus details of how the story and artwork were developed.

I can't wait to read the rest of the series!