Review: The Hobbit by J.R.R. Tolkien 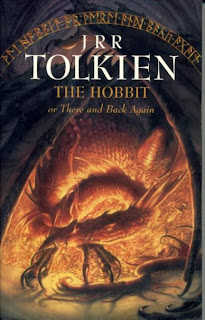 Poor Bilbo Baggins! An unassuming and rather plump hobbit (as most of these small, furry-footed people tend to be ), Baggins finds himself unwittingly drawn into adventure by a wizard named Gandalf and 13 dwarves bound for the Lonely Mountain, where a dragon named Smaug hordes a stolen treasure. Before he knows what is happening, Baggins finds himself on the road to danger. (via amazon.co.uk)

I am so glad to have finally read this book! I've been a fan of The Lord Of The Rings film trilogy for years, and so have been meaning to get around to reading the original works by Tolkien himself. I have to admit though that it was all this talk about the upcoming film adaptation of The Hobbit which gave me the drive to pick up the book itself (these days I'm trying to be good and read the books before I watch the films). Now I can sit back and watch the development of Peter Jackson's latest quest with safe insight into what's coming up!

In terms of the book itself, I was not dissapointed. You really get the feeling that you are an extra member of the excursion to the lonely mountain, following the courageous and intelligent hobbit Bilbo Baggins, the dwarves and the wizard Gandalf on their quest to reclaim the Lonely Mountain treasures from the evil dragon Smaug. All the changing surroundings and eclectic characters are described beautifully, and while this is a somewhat long and perilous adventure, there is no shortage of magic, cheer or even of song.

Tolkien originally wrote The Hobbit for his children, so if you have kids of your own who enjoy stories of enchantment then it's likely that they'll love this. Of course, the appeal doesn't stop there - there is enough in this book to appeal to many adults. This is also the prelude to The Lord Of The Rings series (though you do not need to read one to enjoy the other), and from what I understand they are more orientated towards an older audience.

Personally, I can't wait to read the rest of Mr Tolkien's books!
Written by Sophie at 11:23

Email ThisBlogThis!Share to TwitterShare to FacebookShare to Pinterest
Labels: Book, Film, J.R.R. Tolkien, Peter Jackson, Review, The Hobbit, The Lord Of The Rings

Glad to hear you enjoyed The Hobbit! The first time I got introduced to Tolkien was when I caught my cousin reading a graphic version of this novel. I borrowed it from him and fell in love with the characters at once!....then came the years I waited to find Tolkien in our market (I didn't shop online). I bought myself a copy of both The Hobbit and The Lord of the Rings the moment the movie hype brought the books to our stores!

The Lord of the Rings is quite a different experience from The Hobbit, but simply amazing.

I've just looked up the graphic novel on Amazon, and now I must get a copy... looks amazing! Though it'll have to be purchased next month - spent soooo much money on books the past few weeks! Have you read The Children of Húrin? That sounds like an interesting tale, but I've heard it's pretty dark.

I'm dying to read LOTR now, so will probably read those after I've finished Alice's Adventures In Wonderland. Tolkien is genius! :D

To gain a true appreciation of Middle-earth, you have to read The Silmarillion. :) True, there are no hobbits, but you have the Creator Iluvatar, the lesser gods of Valar, Elves, Men, dwarves, dragons, Balrogs, Maiar like Sauron... <3 A shorter version of CoH is presented in it too.

If you are not opposed to audiobooks, I would suggest listening to CoH narrated by Christopher Lee. There's not many audiobooks that I want to own, but that most certainly is one of them!

Thanks for the recommendations! I actually bought The Silmarillion at the weekend, and so it's poised ready and waiting for when I finish The Lord Of The Rings. I'm definitely going to see if I can get the CoH audiobook... must be amazing hearing it read by Saruman himself! :-))