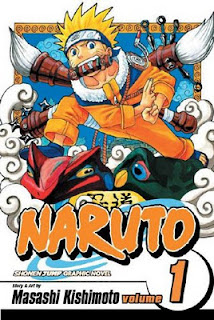 Naruto is a ninja-in-training with a need for attention, a knack for mischief and, sealed within him, a strange, formidable power. His antics amuse his instructor Kakashi and irritate his teammates, intense Sasuke and witty Sakura, but Naruto is serious about becoming the greatest ninja in the village of Konohagakure! Believe it! (via Goodreads)

Though I think I've heard of an anime series of the same name, I've never seen it and so didn't know exactly what I was getting into. At first, I got off to a bit of a slow start with Naruto. I wasn't exactly clear on what was supposed to be happening, apart from understanding that the main character, Naruto nonetheless, is a trouble making ninja-in-training who is disliked by nearly everyone in the village. He fails to graduate from the academy for the fourth time, thus having to repeat his training yet again. But the next part of the story is where it got interesting for me – it's revealed why Naruto gets no respect from the villagers in an escapade that brings quite a few secrets and truths to the forefront.

I ended up enjoying this in the end. However, there were some panels that I found were confusing or misleading and I got a little lost in the story. Does anybody else get moments like that when they read manga; where you have to really look at a particular drawing to figure out what's going on before you can move on? This happened to me more with Naruto that it has with any other manga that I've read.

Altogether, though, an excitingly offbeat story with some interesting twists. Good if you like ninjas, paranormal activity and some good ol' Japanese references (lots of Ramen is involved!)