Review: Rian of the Elves: Welcome to the Spire by Erin Hassinger 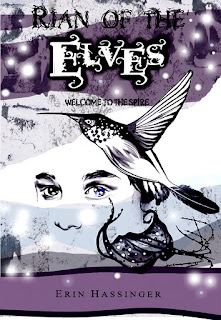 What if the person you loved more than anyone found it too hard to share their darkest secret? Samuel Mangus quickly discovers that his dad has had a pretty good reason to keep his hidden. A powerful Elf, Aubrey Mangus chose to leave his homeland long ago, taking nothing along besides his most prized possession—a mortal son.
For fourteen years, Sam’s life couldn’t have been more pleasingly plain. Yet, the last day of school was anything but that. His teacher sends a gift home to his handsome father, while he’s just had a conversation with a talking bird named Justus Sneeble. Worse than that, the Sneeble claims he’s come to warn him of something. Sam hopes he’s imagined the meeting, but once home is greeted by an evil creature called Recene. What happens next is too much to believe.

In Rian of the Elves, Sam meets new friends, each of them a different breed, each born with extraordinary gifts of their own. The Guild they form will be unprecedented and each has the honest intention of helping him succeed. Their Spire is the most magical place he’s ever been. So why is it that no one can tell him what lies beyond the plain, wooden door atop the Anteroom’s stairs? Oddly enough, Sam finds it more mesmerizing than anything else there. In the end, the answer is nearly heartbreaking and Sam must face the ultimate test of bravery and goodness on his own. (via Goodreads)

I'm so glad I can finally review this book! It feels like forever since I started it (once again, blame university & other life demands for that one!)

Rian of the Elves is an enjoyable fantasy tale. It's very well written, and I really admire the author's imagination. Erin has certainly invented an extensive new fantasy world with highly imaginative species and characters; of which possess some intriguingly unique talents. I also really enjoyed the sense of camaraderie between them all, and this is what essentially forms the heart of the story.

But, I did find some drawbacks. Though a good tale, there were some aspects of it that I thought were a little drawn out. For example, when the lead character Sam is waiting for an explanation about a particular situation, there's some beating around the bush before the explanation is finally given. Also, there are so many different characters, species and places to remember that I sometimes became a little confused.

Overall, however, a good fantasy with a big heart of gold. I'd recommend this to young adult readers.


If you would like to buy a copy of Rian of the Elves, visit amazon.co.uk or amazon.com.