Treasures of the Bodleian exhibition 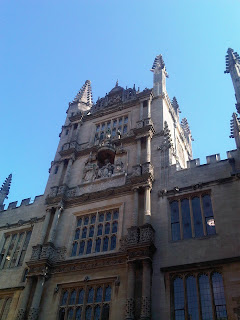 Back in July, I wrote a blog post about Jane Austen's manuscripts after part of her first draft for The Watsons had been sold at an auction for approximately £1million to the Bodleian Library in Oxford. I found out later that the manuscript would be put on display there at the end of September as part of an exhibition called Treasures of the Bodleian, so of course I instantly decided that I couldn't miss this opportunity to see a 'piece' of Jane in the flesh!

Today, then, I dragged my fabulously patient friend Nicola to go and see it. Nicola's not much of a book person herself, so she was a little apprehensive about going at first and planned on leaving me to it while she browsed around town. But she ultimately decided to follow me and give the thing a try, and after we arrived she was mesmorised! She probably just thought I was going to stare at a bunch of open books in an old building for half an hour! Haha. But that's the power of history, right?

Yup, the exhibition is amazing! There's so much to see – from an Egyptian letter originating from approximately 200 AD to a box full of 'Free Nelson Mandela' badges, I'd say that there's definitely something for everyone. Plus it's incredible just being a few inches away from such treasure; separated only by glass from the penmanship of a favourite author or a document so important to history.

I desperately wanted to take photos of the displays to share with you guys here, but they didn't allow photography (most likely for good reason). Luckily, though, on the Bodleian Library website they have catalogued each piece with a brief explanation of its background, so here are a few of my favourites from the exhibition:

J.R.R. Tolkien, Conversation with Smaug
(1936)
'In this illustration to The Hobbit, Bilbo Baggins, rendered invisible by a magic ring, converses with the dragon, Smaug. Tolkien’s fantasy world, Middle-earth, is populated with creatures that owe much to the literary tradition of northern Europe. A Professor of Anglo-Saxon at Oxford, Tolkien had an expert knowledge of this tradition. In the year he drew this watercolour, he wrote: "A dragon is no idle fancy. Whatever may be his origins, in fact or invention, the dragon in legend is a potent creation of men’s imagination, richer in significance than his barrow is in gold."'

Letter from an Egyptian boy to his father
(Around 200 or 300 AD)
The letter reads:
'Theon to his father Theon, greetings. A nice thing to do, not taking me with you to the city. If you refuse to take me with you to Alexandria, I shall not write you a letter or speak to you or wish you good health. So: if you go to Alexandria I shall not take your hand or greet you ever again. If you refuse to take me, this is what happens. And my mother said to Archelaos, “He’s upsetting me, take him away!” A nice thing to do, sending me these grand presents, a hill of beans. They put us off the track that day, the 12th, when you sailed. Well then, send for me, I beg you. If you don’t send for me, I shan’t eat, I shan’t drink. There! I pray for your health. [Address] Deliver to Theon from Theonas his son.'

William Blake, Songs of Innocence
(1789)
In contast to the other objects in the Literature and Music theme, this book is physically the work of one man. Save for the paper-making and binding, Blake did everything: the writing, the illustration and the printing. Only in this way, he believed, could he retain artistic control and escape the tyranny of the publisher (‘Even Milton and Shakespeare could not publish their own works’, he wrote). Blake announced his unique method of ‘illuminated printing’ in a 1793 Prospectus. He had, he said, the ‘means to propagate … the Labours of the Artist, the Poet, the Musician’ thanks to a ‘method of Printing both Letter-press and Engraving in a style more ornamental, uniform, and grand, than any before discovered’.

Magna Carta
(1217)
'The Bodleian has four of the seventeen surviving pre-1300 ‘engrossments’ of Magna Carta, three of which date from 1217 and one from 1225. With each reissue, an official charter was written, sealed and sent out from the Chancery to each county. Agreed by King John at Runnymede in 1215, the document was revised and reissued over the next 80 years by or for successive monarchs. The engrossments of 1217 were issued in the name of the boy king Henry III and bear the seals of his guardians William Marshal and the papal legate Cardinal Guala (on the left, here worn away).'

Jane Austen, The Watsons
(Around 1805)
'Jane Austen worked on the The Watsons some time between 1804 and 1807, but for unknown reasons never finished it. The story largely concerns the efforts of Emma Watson’s three sisters to get themselves married.
This is part of Austen’s first draft, and it is one of the earliest examples of an English novel to survive in its formative state. Acquired at auction earlier this year, it was the last major Jane Austen manuscript in private hands, and the most significant Austen item to come on the market in over twenty years.'


To view all the treasures currently on display, click here.

If you can get to Oxford, seriously do not miss this exhibition! It's running from now until December 23rd, so you still have a bit of time before these pieces re-enter the vaults. I'll definitely be going back to take it all in some more! :-)
Written by Sophie at 00:59