Review: Care of Wooden Floors by Will Wiles 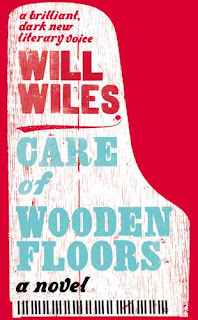 A bold and brilliant debut from a darkly funny new voice. Oskar is a minimalist composer best known for a piece called Variations on Tram Timetables. He is married to a Californian art dealer named Laura and he lives with two cats, named after Russian composers, in an Eastern European city. But this book isn't really about Oskar. Oskar is in Los Angeles, having his marriage dismantled by lawyers. He has entrusted an old university friend with the task of looking after his cats, and taking care of his perfect, beautiful apartment. Despite the fact that Oskar has left dozens of surreally detailed notes covering every aspect of looking after the flat, things do not go well. Care of Wooden Floors is about how a tiny oversight can trip off a disastrous and farcical (fatal, even) chain of consequences. It's about a friendship between two men who don't know each other very well. It's about alienation and being alone in a foreign city. It's about the quest for perfection and the struggle against entropy. And it is, a little, about how to take care of wooden floors. (via Goodreads)

Urgh. Okay, I'll admit – I haven't finished this book. It's written very well and in a pretty unique way, but I just couldn't get into it. Basically, the whole story is about a person who goes to look after his friend Oskar's flat, which is in a foreign Eastern European country, and Oskar is excessively particular about every detail of its upkeep. But things start to go horribly wrong; starting from the moment when this friend manages to leave an unsightly mark on the wooden floor, which Oskar is bound to notice.

Wiles himself is an architecture and design journalist, so it's easy to see where he got the inspiration for this book – it is very design oriented. And because of that, a lot of the plot revolves around the objects and spaces around this flat. It's a clever idea, but it didn't interest me; mainly because the story moves along so slowly. I prefer books that have a bit more plot, and move faster alongthan this one does.

I'd say that if you're interested in interior design and/or have a lot more patience than I do, then Care of Wooden Floors might be for you.