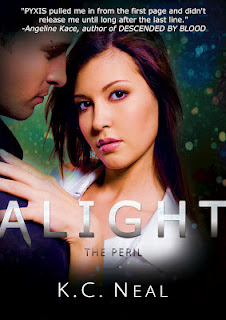 
When Corinne learns who the second Guardian is, she must find a way to make peace with the last person in the world she wants to deal with. As she struggles, her nemesis unleashes an otherworldly evil, and a mysterious illness strikes Corinne’s friends. Faltering under the weight of her destiny, Corinne escapes to the dream world. There, she meets Zane, an Australian guy with a hot accent and a revelation that binds them together and alters the path of Corinne’s life. She throws herself into fighting for everything she loves, but just as she’s certain she will prevail, she’s robbed of what she needs most. (via Goodreads)

It's been over a year since I read the first Pyxis book, The Discovery, which was easily one of my favourite reads of 2011. The cliffhanger had me waiting with bated breath for Alight – what was going to happen to Corinne, Mason, and Angeline now? And who would this other guardian be? My expectations were high.

Unfortunately, Alight has that middle-syndrome; where the novel acts as a bridge to the beginning and end of a series, causing the plot to slow down (something Catching Fire by Suzanne Collins also suffers from). Not a lot of big, interesting things happen.

Because of this, the book dragged. There seemed to be a lot of waiting around when I expected more action. I also wanted more character descriptions – it's been so long since I read The Discovery that I'd forgotten what Corinne and her friends looked like.

Even so, there was enough content to keep me interested in the Pyxis series. The description of events is very clear; from the movement between different realms to the connection between members of the union. I also appreciated the appearance of the Aussie character, Zane, and the intrigue he provided.

A lot of questions certainly have arisen from Alight. It's not the perfect novel, but I still can't wait to find out answers to all these questions I have!