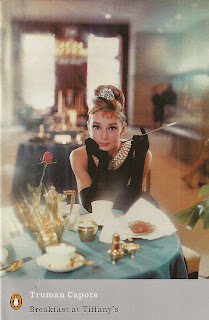 In this seductive, wistful masterpiece, Truman Capote created a woman whose name has entered the American idiom and whose style is a part of the literary landscape. Holly Golightly knows that nothing bad can ever happen to you at Tiffany's; her poignancy, wit, and naïveté continue to charm. (via Goodreads)

Breakfast at Tiffany's has been one of my favourite films for years, so I thought it was about time that I read the short story it's based on.

Thankfully, I wasn't disappointed; Capote is truly a beautiful writer. I loved that Holly, the protagonist, is seen directly through the eyes of an unnamed narrator (he's called various things by Holly – Fred, Buster, Cookie, etc – but never his real name). You can sense this man's obsession with each encounter, and the internal battles he faces just trying to keep himself from thinking too much about her.

He is completely bewitched by Holly's life, as I felt myself becoming on each page. Holly is such a complex character with many contradictions, and such a naïve and romantic way of seeing herself and those around her.

All this is brought to life with Capote's evocative, almost poetic writing style. At various intervals, I had to stop and note down the page numbers of various sentences and passages that I thought were particularly effectual. Here's one:


"The morning light seemed refracted through her: as she pulled the bed covers up to my chin she gleamed like a transparent child."

It feels like it's been such a long time since I've found a story that has captured my interest as much as Breakfast at Tiffany's. It's different to the film in various ways (for example, the book is set in Manhattan during the 2nd World War, while the film is early 1960's), but this is nothing surprising.

Truly a glamorous and entertaining read.