Review: Harry Potter and the Philosopher's Stone by J.K. Rowling 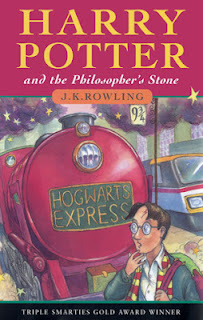 Harry Potter has never played a sport while flying on a broomstick. He's never worn a cloak of invisibility, befriended a giant, or helped hatch a dragon. All Harry knows is a miserable life with the Dursleys, his horrible aunt and uncle, and their abominable son, Dudley. Harry's room is a tiny closet at the foot of the stairs, and he hasn't had a birthday party in eleven years. But all that is about to change when a mysterious letter arrives by owl messenger: a letter with an invitation to a wonderful place he never dreamed existed. There he finds not only friends, aerial sports, and magic around every corner, but a great destiny that's been waiting for him...if Harry can survive the encounter. Rescued from the outrageous neglect of his aunt and uncle, a young boy with a great destiny proves his worth while attending Hogwarts School for Witchcraft and Wizardry. (via Goodreads)

It feels great to have finally read The Philosopher's Stone! Though I thought they were good, I wasn't completely spellbound by the films and hadn't watched all eight until they were shown on the movie channels. But, having then done so and felt their appeal grow on me, I decided it was time to at least attempt to read the books.

Sometimes when a book is well-loved by such a wide audience, it can be daunting delving into its pages for the first time because of such expectancy. Thankfully, though, I enjoyed The Philosopher's Stone. Rowling has done an amazing job of creating a hidden world of whimsical magic, I wished for it to be real. I thought, must I live in the Muggle world? Why couldn't I get a letter inviting me to study at Hogwarts? On my next trip to London, should I go searching for Platform 9 and 3/4 at King's Cross Station? And it seems unfair that I can't get an owl to deliver my mail!

The book is also very British, which I loved. Even though Hogwarts is an establishment like no other, I was still brought back to my own school days with that beginning-of-year uncertainty, teachers that both encouraged and intimidated, and students who were prefects, head boys and girls, good friends and aggravating classmates, and, of course, those uniforms.

However, one thing lost on me was some of the excitement, having seen the film quite recently and remembering the outcome of certain events. Though as with any adaptation, many parts of the book had been changed or left out completely, which meant that some suspense still lingered.

I plan on reading the next couple of books in the series, at the very least, which I'm eager to do as soon as possible. If things go well, this'll probably all result in a partial addiction (I already want take the train into London and go on a Potter tour!)