This week's featured blogs are
Belle's Books
and
Stuck In Books
Having missed last week's festivities, I'm back on the Follow Friday train! Woohoo!


Q. If you could write yourself a part in a book, what book would it be and what role would you play in that book? 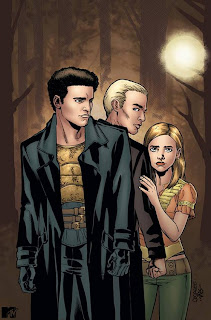 Hmmm, I had to think about this for a little while, but now I've got it... easy! I'd want to be some kind of immortal being with super strength, or perhaps a superhero or superhuman. Being a vampire would be awesome to an extent, but I definitely wouldn't be an evil one! I'd either be soul-having like Angel or Spike, or beg the Cullens to take me in and teach me their ways...! And of course, I would want the personality to go alongside all this; no use having amazing superpowers if you're as dull as watching paint dry!

As for my role, I don't know if I'd want to be the heroine in charge of saving the world or anything. But I'd like to think my superpowers would give me enough intestinal fortitude to at least do something towards helping to stop an apocalypse, invasion of aliens, world war III... you see where I'm going. ;-)


How about you guys? What part would you play in the book of your choice?