REVIEW: Buffy the Vampire Slayer – Season 8, Volume 2 – No Future For You 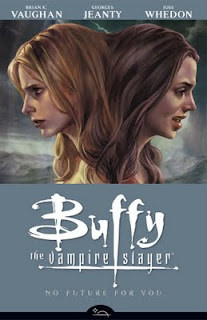 When a rogue debutant Slayer begins to use her power for evil, Giles is forced to recruit the rebellious Faith, who isn’t exactly known for her good deeds. Giles offers Faith a clean slate if she can stop this snooty Slayer from wreaking total havoc--that is, if Buffy doesn’t beat her to it.
Georges Jeanty (The American Way) remains at the top of his game as series artist, and Whedon continues as Executive Producer in this direct follow-up to Season Seven of the smash-hit TV series. (via Dark Horse)
The Buffy Season 8 fest continues! This is definitely my favourite volume out of the three I've read so far. Here we meet Faith and Giles for the first time in season 8, and at the beginning we find out a little of what the former has been doing since the end of season 7. Giles, however, remains a bit of an enigma until near the end of this volume.

As with volume 1 there are five comic books in total here. The first four, collectively named No Future For You, focus around Faith as she is recruited by Giles to take down a snobby, power hungry slayer called Gigi, and put an end to her ways before she causes unrepairable damage. Faith travels to England and goes undercover, attempting to move in closer to the slayer's proximity, but she soon finds herself identifying with Gigi and hesitates getting the job done. Sounds like typical Faith, right? So we're left wondering for a while which side of her will prevail – the evil or good?

If you're a Faith fan, this isn't gonna let you down. The whole story is her – exciting and unpredictable to no end. I'm not a huge fan of Faith's (too much evil!) but this really got me. And I must admit that she seems more interesting in comic book form than Buffy does! The ex-rogue slayer should've seriously got her own series.

The extra comic is called Anywhere But Here, and is not directly connected with Faith's No Future For You. It follows Willow and Buffy into the inter-dimensional lair of a demon called Sephrilian, in the hopes that it will reveal more about the mysterious villian known as 'Twilight' (the mystery of 'Twilight' and its motives cover the main story ark of season 8). But, as usual, trouble ensues, and some revealing secrets are uncovered. A pretty good stand alone story leaving you ready for volume 3! ;-)