Review: Mathias Bootmaker and the Keepers of the Sandbox by Edward Medina 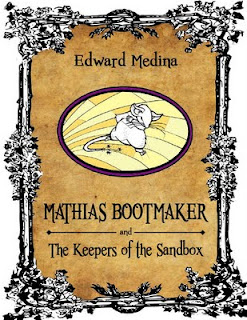 The world of Mathias Bootmaker and the Keepers of the Sandbox, Book One: It Is Said, is a fantasy full of mysteries, riddles and secrets.

It is the story of Mathias Bootmaker, a young man searching for the better parts of himself. His search for what he's lost begins an amazing adventure through a world of extreme imagination. A world he helped to create but a world he can't remember anything about. There's a dragon and a genius. There's a very scary little boy and a very gifted little girl. There's darkness and light, deadly evil and glorious good. It's the story of his life, the birth of creativity and the true power of the energy all around us.

In this tale of redemption, in order to find what he seeks, Mathias must save a people who were once great but are now, by their own hands, victims. He must help them face a terror that they themselves created. He must find a friend that has disappeared. Befriend a reluctant guide and rescue a very unique group of children trapped in a cursed castle full of tragedy.

Mathias Bootmaker and the Keepers of the Sandbox is a dream embedded within a nightmare. A maze inside a labyrinth. It reads like an adventure. It plays like a thriller. It's designed to make you question every place you go and every character you meet. It's designed to be a puzzle you must solve. It's meant to blend grand fun and fright in the tradition of Carroll and King.

Turn the pages. Follow the path. Keep an eye out for clues. Beware of traps. But most important of all... you must not fear the Darke. (via amazon.co.uk)

Mathias Bootmaker is a wise and quirky tale which I found to be quite interesting. The book starts off with an exciting visit to Fears Corner – a mysterious place that is vividly and effectively described by the author. Later on we meet Mathias, who essentially has some form of amnesia and is making his way through an alternate dimension in order to seek the roots of his existence. He encounters characters who give him clues as to where to go and what to look out for, and as we move on his experiences become more dark and perilous. By the end, we’re left with an intriguing cliffhanger that leads straight into the second book of the series (which is yet to be released).

The beings Mathias meets along the way are fun and very weird, and the descriptions provided evoke a true sense of the surroundings. However, I did feel as though there were some elements of the story telling that could’ve benefitted from further editing, such as sentence structuring. I felt as though, at times, there were too many short sentences stuck together, and this tended to slow down the pace and compromise the effect in certain places.

Despite this, Mathias Bootmaker is an original, brave and somewhat fulfilling story. It would probably best suit mid-level readers, however if you enjoy the fantasy genre then you might want to pick it up and give it a try as well.

To purchase a copy of Mathias Bootmaker, visit amazon.com or amazon.co.uk.
Written by Sophie at 22:45