Review: Shelby and Shauna Kitt and the Dimensional Holes by P.H.C. Marchesi 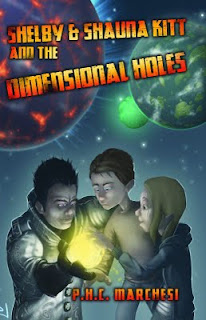 Shelby Kitt never gets lost. Shauna, his sister, never gets sick. As far as most people are concerned, the inseparable Kitt twins are odd 13-year-olds. No one, however - not even Shelby and Shauna - can guess how extraordinary they are until the vice consul of Miriax, a planet from another dimension, asks them to take part in a dangerous mission. From that moment on, Shelby and Shauna Kitt discover that the universe is full of klodians, cities in jungles, giant bats, and tea with mushrooms. Most of all, they discover that it will take more than special powers for them to face - and survive - the evil that threatens the galaxy. (via Goodreads)

I’m not too sure where to start the review because this book was, literally, out of this world! I’m not normally interested in science-fiction, but the concept is so original, unique and intricate that it was hard for me not to get swept away! I’ll try to summarise the plot for you, but bear with me because it might sound complicated!

The story is about three planets that exist in three different dimensions, all within a close distance of each other – Earth, Miriax and Klodius. They are each invisible and inaccessible to one another until these dimensional holes open up; causing a life-threatening imbalance between them. It’s up to a bunch of humans recruited by the aliens of Miriax to restore this balance and save the planets. The task especially falls on twins Shelby and Shana Kitt, who seemingly possess supernatural powers of the most useful potency.

Did you get that? Don’t worry if you didn’t, because in the book the author explains each component with such fantastic flow that it’s difficult to get lost. Saying this, there were parts that did confuse me a little, but nothing that prevented me from straying far from the plot. The description is excellent – you really get to know the planets of Miriax and Klodius, how they work, and why they’re so vital to each other’s existence. The plot itself and the characters that form it are full of suspense – I was dying to find out who was actually evil, who was good and what would happen next! It’s no doubt a nail-biter of the very best kind. I just love a story where you can’t figure out who’s the good guy and who’s the bad, and in this story it truly could be anyone.

So, do you like some suspense, and a well told, unique story with clearly imagined new worlds? Then this may just be the book for you. The author told me that it’s suitable for upper mid-level readers (probably due to the fact that a lot of the characters, including the hero and heroine, are teenagers), but this really will appeal to a broad demographic. Something to get your hands on and experience first-hand, for sure!

To find out more about Shelby and Shauna Kitt and the Dimensional Holes, and to purchase a copy, check out the author's blog at shelbyandshaunakitt.blogspot.com/
Written by Sophie at 12:34