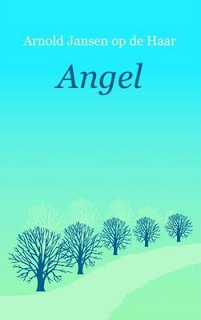 Many people have plenty of reasons to run away, but very few actually do it.

Timjen Klein Gildekamp is a jobbing writer living in a small provincial town. His world is lonely and stifling.
We find out why his father's war is still important to his life today and how the world has changed. Timjen has moved away from his roots, but not far enough, so he feels trapped.
When all seems lost, Angel comes to the rescue, but is she too late? They make an interesting pair: she the masseuse by day and singer by night, and he the committed writer of literature.
A surprise lottery win enables them to escape their dreary and oppressive everyday existence. During their flight, they experience a number of monotonous incidents in Spain and London, ending up on a remote Scottish island.
Timjen believes that, at the end of our life, what remains of us is love, but is he right?

Angel is a novel about expectations, failures and the fragility of our existence.

Angel was first published in Dutch under the title of Engel, and has been translated into English by Bernadette Jansen op de Haar. It's the sequel to King of Tuzla, but can be read as a stand-alone novel.

The story is very intriguing: it's about a couple who decide to literally run from their lives together after winning 50,000 Euros, in an effort to escape their pasts and the everyday grind that they struggle with. But, perfect as it sounds, things don't go completely to plan.

Frequent flashbacks, and even some chapters which show the perspectives of those people that they are trying to run from, provide the reader with a good dose of insight. However, while this was useful, at the beginning of the book I found it a little confusing, and perhaps it would have been useful for the start of each chapter to mention the place and year. But this was something I got used to later on.

With that said, I did appreciate the variation, and another interesting aspect was the inclusion of poetry. I understand the author has previously had works of poetry published, so I enjoyed that he chose to intergrate this aspect of his abilities into a novel.

Overall a good read, but some room for improvement. If you like your novels to be rich in complexity, and want to read a thriller with a bit of a rhythmic difference, then perhaps you will enjoy Angel.

--
For more information about Angel, visit the publisher's website.
Written by Sophie at 15:09