Review: The Good Witch of the West by Noriko Ogiwara (& art by Harahiko Momokawa) [manga] 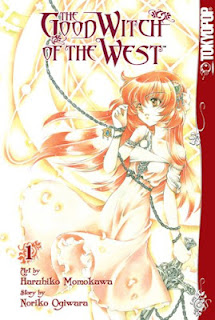 Fifteen-year-old Firiel lives in the remote highlands with her reclusive father. Country life is pleasant enough for Firiel--her father's servants adore her, his apprentice Rune is a good friend, and she's about to attend her first ball! But as Firiel prepares for the gala, she discovers her past is more complicated than she had thought--and she may be the heir the throne! Unaware of the danger that faces her and those whom she loves, Firiel courageously quests for the truth. In this unique, evocative Cinderella story, heritage and destiny converge to change a young girl's life forever! (via Goodreads)

It's been a while since my last manga review )and I am shamefully behind in my regular reading), so I thought it was about time for another.

The Good Witch of the West is a fantasy drama manga about a young woman living a modest life in the countryside. However, her world is turned completely upside down after she attends a ball at a palace and discovers that she is an heir to extraordinary power.

I really enjoyed The Good Witch of the West. It got off to a bit of a slow start, but that's usually how it is when I read manga; takes me a few pages to get into the right 'flow' (reading right-to-left instead of left-to-right can take some getting used to!) But it didn't take long for this one to capture my interest. It's probably the most well-constructed story of any of the manga I've read so far. Of course, it's still pretty over-the-top (as you would rightly expect), but the writer has done the majority very tastefully, even including a good few artsy metaphors which help to enhance the elegance of the story.

Altogether, The Good Witch of the West is a fantastic manga. If you love some great artwork, an absorbing storyline with a difference, or just enjoy the fantasy genre, then give this a try.