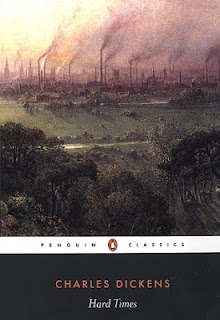 The 'terrible mistake' was the contemporary utilitarian philosophy, expounded in Hard Times (1854) as the Philosophy of Fact by the hard-headed disciplinarian Thomas Gradgrind. But the novel, Dickens's shortest, is more than a polemical tract for the times; the tragic story of Louisa Gradgrind and her father is one of Dickens's triumphs. When Louisa, trapped in a loveless marriage, falls prey to an idle seducer, the crisis forces her father to reconsider his cherished system. Yet even as the development of the story reflects Dickens's growing pessimism about human nature and society, Hard Times marks his return to the theme which had made his early works so popular: the amusements of the people. Sleary's circus represents Dickens's most considered defence of the necessity of entertainment, and infuses the novel with the good humour which has ensured its appeal to generations of readers. (via Goodreads)

According to Goodreads, I've been reading Hard Times since 9th January, so thank goodness it's over and I've read it! Yikes. What a struggle it was to get through. If I didn't have to read it for a university course, I would've given up long ago. I even had to switch from print to audio book just to make it easier on myself!

This is the first full-length Dickens novel that I've read, and it's undoubtedly put me off reading any of his others. The description says that this is the shortest of them all, so imagine how long Great Expectations, Oliver Twist or Little Dorrit might take me! I don't think I'll be trying them out any time soon.

Hard Times had a number of points I struggled to feel enthusiastic about, but there were a few that I enjoyed about it. The characters are very diverse and of course well written; the villains are properly so, and the endearing characters grow more intriguing. There are also many twists which aren't expected, and the conclusion I found somewhat heartwarming. But, in the end, Hard Times proved too monotonous for me.

I'll stick to reading Dickens' short stories and articles, which I seem to enjoy much more.