Matt Bomer as Christian Grey? Do you really think so, Entertainment Weekly? 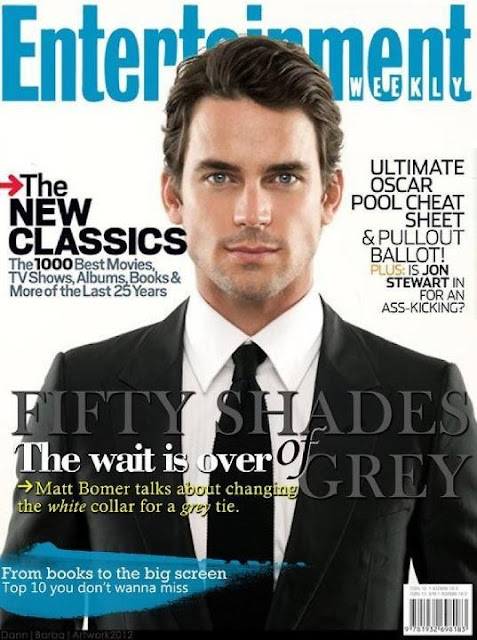 At about 3am last night, I was just about to go to sleep (try and get me to sleep before 2am, I dare you!) when I stupidly decided to search #MattBomer on Twitter.

Then I found the image above, and proceeded to have a coronary.

Matt Bomer as Christian Grey? Matt Bomer, the most beautiful man in the world (in my humble opinion), talking about the possibility of playing Christian Grey in the upcoming film adaptation of Fifty Shades of Grey?? Holy crap, that's perfect!

In my late night/early morning state, I was convinced this was a leaked cover image from a future Entertainment Weekly issue. It certainly looks authentic. But various things started refusing to add up, and that other thing called 'reason' began taking over.

First of all, the cover story says, "The wait is over. Matt Bomer talks about changing the white collar for a grey tie." Doesn't that sort of imply he's already taken the role? Before they've found a director, or even written the screenplay?

This isn't something he would do. How do I know? Well, here's what Matt said in an article on HitFix, where he talks about another risque role – playing a stripper in the film Magic Mike:


Bomer says he was "terrified and confused" on why he was considered for the film, but Soderbergh's involvement sealed the deal.

Who knows, perhaps they've written the screenplay and found the director, but are keeping it all a big secret? Hm, seems very doubtful. And, as far as I know, casting comes after both of these are ticked off the list.

Not to mention, what's this about an Oscars pool on the cover? It's a bit out-of-season, isn't it? Add in the fact that season 4 of White Collar has just begun, so why would Matt be showing up on the cover of a magazine talking about a film in the very early stages of development, instead of the TV show in which he currently stars?

Anyway, enough analysing, I think I've convinced myself of its inauthenticity now! But hopefully we won't be waiting much longer for more legitimate Fifty Shades movie news. In the meantime, just enjoy this photoshopped EW cover and continue watching Neal Caffrey out-pretty and out-smart everyone on White Collar.


What do you think of the cover? And who would play your Christian Grey?
Written by Sophie at 19:03