Review: Bared to You by Sylvia Day 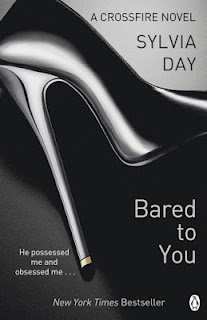 Our journey began in fire...

Gideon Cross came into my life like lightning in the darkness—beautiful and brilliant, jagged and white-hot. I was drawn to him as I'd never been to anything or anyone in my life. I craved his touch like a drug, even knowing it would weaken me. I was flawed and damaged, and he opened those cracks in me so easily...

Gideon knew. He had demons of his own. And we would become the mirrors that reflected each other's most private wounds... and desires.

The bonds of his love transformed me, even as I prayed that the torment of our pasts didn't tear us apart... (via Goodreads)

I've seen Bared to You being mentioned as 'the next Fifty Shades of Grey', and this is what immediately drew me towards it. And considering how much I adored the latter, it was very difficult for me to be objective when reading Sylvia Day's novel so expect a lot of comparisons between the two as you read on!

I will say, firstly, that I didn't enjoy Bared to You nearly as much as Fifty Shades. While it is a much shorter book in length, the writing isn't as clever and this made it drag out. I felt like there were many scenes that could've been shortened, or maybe cut altogether, to make space for character evolution that appeared rushed and underdeveloped in places. This included the two main characters, Gideon and Eva, whose intimate relationship seemed choppy because of it.

Then there were the character's friends and relatives. There was Eva's friend, Cary. The reader is supposed to feel the bond between the two as they support each other through their various emotional struggles, but I just found him obnoxious and, at times, unnecessary.

Then Gideon's friend, Magdalene. She showed up disapproving of Gideon's new relationship with Eva, but she ended up being another character whose personality seemed to jump from one confrontation to another with limited grace.

I think Penguin have picked up Day's novel in the wake of Fifty Shades, hoping that fans of Christian and Anastasia will be left with enough of a craving to, ahem, desire some satisfaction from Gideon and Eva (I should mention that Gideon Cross, much like Christian Grey, is a famous, young CEO billionaire. The notable difference? Gideon lives in Manhattan!) Certainly a smart move from the publisher's standpoint, but I can't help but think that they've rushed out and grabbed the first erotic novel with enough similarities to Fifty Shades to be able to churn out some attention. And, seeing as Bared to You has made it onto The New York Times bestseller list, it's obviously worked.

Fans of Fifty, perhaps give this a go, but don't expect to be blown away again. There's no clever inner goddess or classy subconscious here!