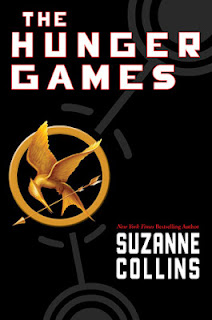 Could you survive on your own, in the wild, with everyone out to make sure you don't live to see the morning?
In the ruins of a place once known as North America lies the nation of Panem, a shining Capitol surrounded by twelve outlying districts. The Capitol is harsh and cruel and keeps the districts in line by forcing them all to send one boy and one girl between the ages of twelve and eighteen to participate in the annual Hunger Games, a fight to the death on live TV.

Sixteen-year-old Katniss Everdeen, who lives alone with her mother and younger sister, regards it as a death sentence when she steps forward to take her sister’s place in the Games. But Katniss has been close to dead before—and survival, for her, is second nature. Without really meaning to, she becomes a contender. But if she is to win, she will have to start making choices that will weigh survival against humanity and life against love. (via Goodreads)

Obviously, The Hunger Games is a hugely successful series. Why has it taken me this long to read it? Well, part of me wanted to rebel against another trend, and part of me was afraid that I'd become as addicted to it as I did Twilight. Why the latter was a bad thing exactly, I don't know.

But the trilogy is impossible to ignore – it's everywhere. Even one of my very good friends, who usually dislikes reading and says she hasn't read a book in years, bought the complete trilogy and absolutely loves it. She's about to finish the third book less than two months after she got the box set, which is pretty amazing for her (she knows that's true)! So that gave me enough reason to stop avoiding The Hunger Games and read the copy I'd purchased for my Kindle.

My expectations were high. Was I impressed? Yes. Was I blown away? No. Don't get me wrong: the plot is extremely unique, well-written, and the characters are completely original. But I felt Part One dragged on slightly and, also, I don't think dystopian fiction is for me. It's just too disheartening. While there were light moments in The Hunger Games, a lot of them were overshadowed by the many dark moments. This is no doubt the intention, but it didn't sit well with me. I like a fair dose of happiness in my books.

In spite of this, I read the book fairly quickly so I must have enjoyed it somewhat. I found myself caring for many of the characters, and this drove me to read on. It's impossible not to feel for them when they've been forced into this grotesque situation.