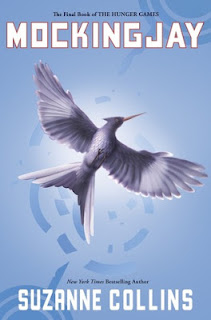 Katniss Everdeen has survived the Hunger Games twice. But she's still not safe. A Revolution is unfolding, and everyone, it seems, has had a hand in the carefully laid plans - everyone except Katniss.

And yet she must play the most vital part in the final battle. Katniss must become their Mockingjay - the symbol of rebellion - no matter what the personal cost. (via Goodreads)

Even though I haven't really been able to place just how much I liked or loved this series (weird, I know), I'm really sad that it's over! I've definitely got a post-series-reading hangover on my hands. So, though dystopian isn't usually my cup of tea, it's fair to say that I've thoroughly enjoyed reading The Hunger Games.

Mockingjay is probably my favourite of all three. The intensity, while already high in the other two books, skyrockets. Situations become more unexpected, sometimes more unsettling, but ultimately satisfying. And though I still thought there were parts that dragged out, these were fewer and further between.

The basis of this book involves the full-scale war that erupted in the wake of Catching Fire's epic conclusion. What I've observed from reading it is that although it's a science-fiction/fantasy novel, the turmoil, losses, and emotion that Katniss endures are all very real themes that can be found in our world today. I couldn't help but draw parallels to situations in dangerous, corrupt countries such as Iraq, Syria, and even North Korea. And it makes sense because, to a certain degree, this is what Collins hoped to emulate. Here's what she has said in a Q&A session:


I was channel surfing between reality TV programming and actual war coverage when Katniss's story came to me. One night I'm sitting there flipping around and on one channel there's a group of young people competing for, I don't know, money maybe? And on the next there's a group of young people fighting an actual war. And I was tired, and the lines began to blur in this very unsettling way, and I thought of this story.

She goes onto to say that her father, who served in the US military, thought it important to teach his children the different aspects of war:


...it wasn't enough to visit a battlefield; we needed to know why the battle occurred, how it played out, and the concequences.

Indeed, there are many concequences for Katniss and those around her in Mockingjay. Some will warm your heart, some will break it, and some will probably leave appreciating your own life more. I know it did with me.

A very emotional end to a unique, well-rounded, and addictive series. My only wish now is for more!