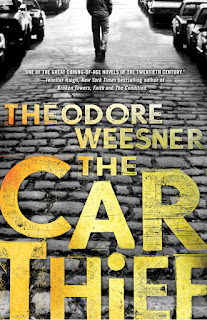 It’s 1959. Sixteen year-old Alex Housman has just stolen his fourteenth car and frankly doesn’t know why. His divorced, working class father grinds out the night shift at the local Chevy Plant in Detroit, kept afloat by the flask in his glove compartment and the open bottles in his Flint, Michigan home.

Abandoned and alone, father and son struggle to express a deep love for each other, even as Alex fills his day juggling cheap thrills and a crushing depression. He cruises and steals, running from, and to, the police, compelled by reasons he frustratingly can’t put into words. And then there’s Irene Shaeffer, the pretty girl in school whose admiration Alex needs like a drug in order to get by. Broke and fighting to survive, Alex and his father face the realities of estrangement, incarceration, and even violence as their lives hurtle toward the climactic episode that a New York Times reviewer called “one of the most profoundly powerful in American fiction.”

In this rich, beautifully crafted story, Weesner accomplishes a rare feat: He’s written a transcendent piece of literature in deceptively plain language, painting a gripping portrait of a father and a son, otherwise invisible among the mundane, everyday details of life in blue collar America. A true and enduring American classic. (via Goodreads)

When I was contacted about providing a review for The Car Thief, I was immediately intrigued. It's not often a book is called 'an undiscovered American classic' (well, unless it's just me that hasn't heard it all that much!)

It begins with a lot of promise. In chapter one, we're instantly presented with Alex driving his latest steal: a 1959 Buick Riviera. He's guiding the car through a cold, snow-covered winter's day, aimlessly drifting from one place to another while he tries to decide where to go next.

That opening immediately sets the tone for the novel. Weesner has written it in such a way that suggests the protagonist is confronting deep personal depression. Alex goes through the motions with a lot of apathy, as if he's trying to protect himself from realising the extent of his difficult situation. The result is deceptively basic, methodical prose.

Unfortunately, though, as I moved further through the book, I began to lose interest. It isn't a fast-paced novel and sometimes I found the level of detail quite mundane. While I recognise and appreciate the techniques Weesner has employed to achieve a somewhat tragic and despairing effect, it just wasn't enough to sustain my attention.

Even though The Car Thief wasn't exactly my cup-of-tea, I can certainly see it appealing to others. If you have the patience that I don't seem to possess, and enjoy stories that deal with deep, personal affliction, it's definitely worth picking up.

--
To learn more about The Car Thief and to purchase a copy, visit the Astor + Blue website.
Written by Sophie at 20:24